After a moderately successful theatrical run, this children’s tale of imagination, perception, and the value of home lands on DVD in hopes of becoming a slightly larger fiscal achievement. Minor success abroad welcomingly complimented the $47.9 million that Nim’s pocketed nationwide. 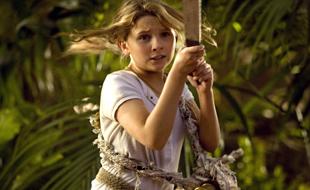 The debut collaboration of directors Mark Levin and Jennifer Flackett imaginatively tells the story of young Nim (Abigail Breslin) and her father Jack (Gerald Butler) who together share an unchartered tropical paradise as their home. The pair, in their own ways, lust for learned adventure and unique discovery, ultimately leading to conflict. The unlikely hero is the film is Alexandra Rover (Jodie Foster), an agoraphobic author who oxymoronically writes about the adventure.

While charming and humorous to its target demographic, the movie tends to more than overstay its welcome to older viewers (read: parents), who will likely find the antics and conflicts to be repetitive. The conclusion, while joyous, is obvious within just a few frames of the film’s opening and the entire body of the picture often feels like a tedious means to an inevitable end.