Despite many highly vocal critics (including yours truly), television program and cultural stronghold Saturday Night Live has managed to retain its popularity even while constantly ushering in new cast members and writers. Thus, it should come as no surprise that the brainchild of former SNL scripter Michael McCullers was a box office success, especially when factoring in the names of Tina Fey and Amy Poehler - two of the more recognizable figures to emerge from the show’s recent seasons. After a successfully marketed opening weekend which nabbed $17.4 million, Mama went on to peak at 2,627 screens nationwide and grossed a respectable $60.5 million total. Sadly, box office earnings are rarely an indicator of quality cinema. 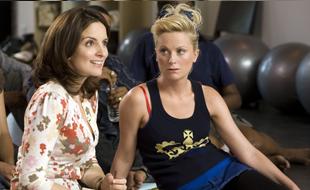 While Mama's supporting cast, which includes Steve Martin and Dax Shephard, comes off as entirely dispensable, Fey and Poehler do have a chemistry that seems to work well despite the poorly fleshed-out script. However, predictability runs rampant throughout the final act, making the more humanistic considerations of the picture seem farcical. McCullers also insists upon overusing the montage, which, again, hurts any emotional response or joy we might get from the inevitable conclusion.