Poor John C. Reilly. He is, without question, a talented actor who has offered a unique air to his roles and has acted splendidly under the skillful lenses of contemporary American greats such as Martin Scorsese (Gangs of New York, The Aviator), Robert Altman (A Prairie Home Companion), and Paul Thomas Anderson (Boogie Nights, Magnolia). Still, his starring vehicles consistently fail at the box office and their critical receptions are none the warmer.

The Promotion, in which Reilly costars alongside Sean William Scott, suffered the same fate. Peaking at only 81 screens and grossing a paltry $408,709, Promotion managed to underperform another unsuccessful Reilly picture Walk Hard: The Dewey Cox Story. 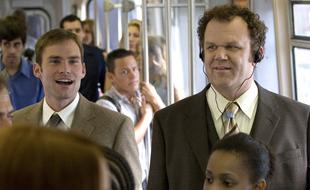 The fault hardly rests on the shoulders of the aforementioned star though, as he (again) isn’t given much to work with here. Portraying a Canadian transfer to a suburban-sized grocery chain, Reilly actually plays second fiddle to Scott in terms of the narrative, which dubs the latter as a fairly pathetic protagonist. The two compete over a managerial position throughout the film, only to learn they are more alike than their ever-budding rivalry would ever suggest.

If it seems as if I’ve skirted talking about the films humor it’s because there is none. I’ll applaud Promotion for taking the high-road and excluding the genre-saturating toilet humor that’s fairly omnipresent these days but, alas, there remains nothing else truly witty or inspiring to speak of. Most of the successful gags are founded by members of the supporting cast (which includes Lili Taylor, Gill Bellows and Jenna Snyder) popping in for a line or two, only to disappear in order to make room for the next actor. It's a stunt that becomes clichéd and tedious rather quickly, making the 86 minute running time seem overlong. Fans of either headlining cast member are recommended to look elsewhere.