Gonzo: The Life and Work of Dr. Hunter S. Thompson

I’m at a loss. Such tremendous pressure comes when writing about Dr. Hunter S. Thompson, though it does not come from outside sources but internal ones. He was arguably the most important writer of my, albeit short, life thus far and, although I’m not writing a unique piece on him, the burden remains. A pioneer of journalism, Thompson had the vantage of unearthly perspective. Chalking his exclusive universal outlook up to his widely publicized affair with hallucinogenics is too easy and too dismissive. The man was a genius despite falling victim to his own cultural detachment. Still, I tread lightly when trying to infer even the smallest detail of his life or personality. 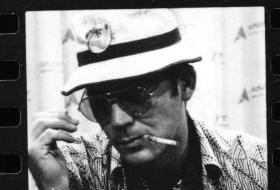 Thompson's radical, often erratic behavior has been a popular topic of discussion amongst, but not exclusive to, literary circles and pop-culture magnets. Several pieces of work exist that demonstrate his behavior and offer psych-light commentary in an attempt to dissect the mind of a man far too who may actually have been far too sane for this world. In spite of this, today’s generation seems to be only half-aware that, “the guy from Fear and Loathing” was actually real so documentaries such as this are always welcome, particularly if they provide something new without bogging themselves down with explaining Hunter. Hunter simply was, or is, and there is little else to this fact. He is best observed and absorbed for he exists on some tangential plane outside our grounded realm.

Gonzo is the latest in the aforementioned parade of media works that attempt to demonstrate the journalistic impact of Thompson and how his Raoul Duke counter-persona developed. The film peaked at 59 screens and it grossed only $1.2 million. Still, it should fair better on DVD. It is hard to imagine that pinpointing handfuls of Gonzo (the movement not the film) followers would be an easy task for distributors so the low-key theatrical release may make way for a more successful venture into the home viewing market where his fans have immediate access to the material.

The material in question is mostly recycled, but necessarily so. The first hour of the film concerns itself with Hunter building his legacy as a writer both in terms of style and character; the character being he himself. The reason this movement is, again, a cornerstone in a documentary of his life is to demonstrate just how powerful his pen was and how faithful his followers were and are. Director Alex Gibney (Taxi to the Dark Side) takes a slightly different approach from his predecessors though, namely Wayne Ewing’s Breakfast with Hunter, which plays as a breezier, more celebratory rendition of his antics. In Ewing’s film, the superficial matches the subtextual. It goes with what I had mentioned above in accordance to observing Dr. Thompson in order to discover who he is for yourself. It’s a unique feeling and a rewarding one. I refuse to believe that Gibney did not realize this though he was aware that he could not simply repeat the motifs of those who came before him.

Using Hunter’s popularity and esteem as a framework, Gibney begins bleeding his cultural status into his personal life, two ingredients that often mixed throughout his journalistic career. We see Hunter not as the caricature he is often seen as but a worried, longing man who is losing hope in the political and social machines of America. There is a moment where he is described, among other things, as a patriot, and I am inclined to be believe this is true. He was a hungry individual, one who was often in search of some greater truth, a truth that may or may not be concerned with facts. While this may seem contradictory, his life too was in many ways. He believed that fact is something we can grasp, a physicality if you will, but truth extends beyond that and one is not necessarily dependent of the other. This is the best way that I can explain his view and this ideology is present in the film, though only in small doses.

As the film winds down, its intention becomes clear. By documenting Thompson's life, Gonzo aims to show how loved he was as well. The finale is bittersweet, his funeral and an accompanying look into why exactly he decided to end his life when he did do him enough service as an artist but not as a person. At the very least, the message of him being missed is conveyed rather well. Gibney knows to show the loss as not being exclusive to those personally close to him but by a still existing counter-culture and journalists everywhere as well.