Throughout history, few filmmakers have displayed the ability to direct themselves. Warren Beatty demonstrated he was able to in all of his directorial efforts, even if they aren’t standout pictures per se. Clint Eastwood has operated from both sides of the lens for quite some time and contemporary favorite George Clooney has dabbled in such practices as well. Most notable in my mind is French great Jean Renoir who had a starring role in his masterpiece, The Rules of the Game. Perhaps all this seems like a digression when talking about Larry Bishop’s Hell Ride, a film in which he also acted but I assure you, my readers, that it eases my pain to recollect competent directors. After seeing this film, I certainly feel like I need to. 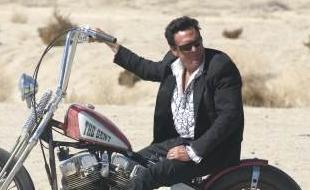 Quentin Tarantino, who is credited as an executive producer, backed the wrong pony here. His name is plastered on the DVD packaging in a manner that would suggest he’s directed the picture. This is not the case. Instead, Bishop went out of his way to emulate all of Tarantino’s usual motifs and characterizations but without any soul or understanding. It is widely known that Tarantino is an enormous fan of cinema and often borrows from or pays tribute to his favorite films and Bishop seems Hell bent on paying homage to a homage. With this, all meaning and context is lost and what we’re left with is a shallow, sloppy film that indulges in adolescent bouts of violence and profanity.

The public didn’t buy the glossed-up ultra-violence either. Only lasting in theaters for two weeks, it debuted on 82 screens before falling to 36 and grossed a total of $213,608. My apologies to those who had to witness such tripe on the big screen and it pains me to say that such a flick may have the cult appeal that it takes to become a DVD hit. Hopefully Tarantino’s upcoming Inglourious Basterds will be a serious enough effort to ward off such grind house fanboyism.