Journey to the Center of the Earth 3D

It should be stated that the full potential of 3D has yet to be realized. Its uses thus far have been overtly gimmicky and the two-toned glasses negate much of the quality of the actual cinematography. Too much effort seems to be placed in producing situations that warrant such effects and the rest of the picture suffers. Of course, I am not speaking of one particular film per se but Journey certainly is guilty of all of the above. 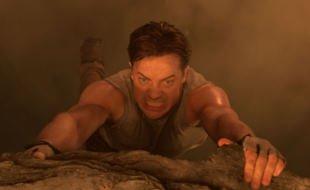 My complaints aside, the public continues to eat up said technology. After an opening weekend that brought in more than $21 million domestically, Journey was able to be triumphant during a competitive summer season (it opened the weekend before The Dark Knight) on its way to grossing a total of around $102 million while seeing a high of 2,830 locations. Obviously this spells success for 3D films, as well as for first time director Eric Brevig but, as of now, he has no other projects slated for the future.

The film itself follows a very basic concept and decides to run with it, trying to cram as much action and “fun” into its 93 minute running time as possible. It seems as if Brevig was shooting to create a B-film through and through but this hardly excuses the absurd lengths he goes to in trying to craft action. Yes, most will realize that such an expedition is impossible; one cannot actually journey to the center of the Earth. This is easy enough to ignore but the manner in which they get there (and subsequently escape - happy ending included) are so poorly contrived that you may question what brought about such ideas. The answer would be the need for convenient 3D gags, which run rampant and basically control the narrative. This is an obvious example of quality taking a backseat to technological needs. The mentality seems to be that featuring 3D means that it must be utilized to the fullest, but the technology is still not adept at establishing background depths with any type of clarity. It is also not convincing in the manner which it demonstrates people moving against said backdrops. I will say that the 3D presentation on this DVD is an improvement from Hannah Montana’s movie but I feel it’ll still be quite some time before we see it applied to a good film.