Star Wars: The Clone Wars doesn't feel like Star Wars. The iconic crawling text that serves as the background story is missing for the first time. The magic of Frank Oz is gone. Remember the phrase, “I’ve got a bad feeling about this?” Well, that’s missing too, along with the familiar May theatrical release date. I’d say that the fact that a DVD release date was set before this dud hit theaters more or less sums up both the confidence in the film and the artistic competence of the filmmakers involved. 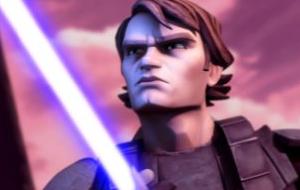 Clone Wars is a massive cinematic failure and its box office performance reflects that. The picture saw an impressive 3,452 screens when it opened but word of mouth dropped that number week by week, and rightfully so. Its gross totaled around $35 million.

If I were to sum up the direction of this effort in a few words, I’d label it as a children’s treatment that does not belong in the Star Wars canon. The story focuses on, not so much a war, but a mere journey. That journey is fueled by the recent kidnapping of Jabba the Hutt’s newborn son and the Separatists’ insistence to return the youngling safely in order to gain access to integral trade routes which Jabba controls. Attempting to compliment the plot, which is quite simplistic and formulaic, are a series of overlong action sequences that seem more purported in stretching the run time than wowing the audience.

The new characters we are introduced to have none of the creativity or intrigue that has become custom and instead they are harsh caricatures. Ahsoka Tano proves to be a trite attempt to interject a youthful air to the film, as the cocky young apprentice matches the wit and brashness of her master, Anakin Skywalker. Instead of using her age and gender as an insightful mirror into the Jedi/Padawan relationship she is merely a tool to propagate hip slang and juvenile humor. Unfortunately, she becomes a nearly omnipresent figure in the film after her introduction. Sadly, her childish, invitingly inimitable antics are of no comparison for Ziro the Hutt, Jabba’s uncle. What can best be visually described as a giant, purple, intergalactic transvestite, Ziro should be responsible for alienating his share of viewers. Not only is the appearance and hedonistic backdrop incorrigible, but his voice is the contrastingly high to Jabba’s, and the lines he delivers are insufferable.

If I spent a lot of time harping on the shortcomings of two characterizations, it is because their foibles more or less embody the film’s spirit. Clone Wars is an absolutely needless film that patronizes young fans by pandering to the lowest of levels. The inherent problem with this transparent attempt at youthful appeal is that the series is already beloved by young moviegoers. This is an exercise in placation. A poor attempt to simplify something that didn’t need to be simplified and a bastardization of the original trilogy. Even the prequels deserved better than this.