One screen is what it opened on and four screens, its peak, is where it died; a paltry sum of $50,659 being its reward. In all honesty, I can’t say that the grim fate of Takashi Miike’s (Audition) latest was unjust, no. This was warranted...this was warranted. 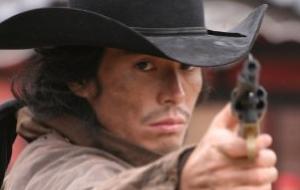 Quentin Tarantino loves films. He loves making them and he loves watching them. A man who once described the filmography of Stanley Kubrick as “cold,” Tarantino slants to the side of interaction and movement, manipulating his own inspirations into something of personable warmth and relation. Especially evident in Pulp Fiction, Tarantino proves that forgotten motifs can be milk for new and exciting content. It’s a form of recycling, in a way, and not just movements are reused but actors too.

As of late though, there’s been a change. Instead of trying to make cohesive expressions by utilizing past works as a focal point, Tarantino has opted to start schilling schlock and offering it as passable entertainment. It started with Grindhouse, an overlong, painfully glorified product of the YouTube generation. It hasn’t stopped here though as he continues to distract himself by producing more imitational trash, dubbing himself as some grand “presenter” as if these are indeed cinematic gifts for us to treasure and enjoy. I could do without them entirely.

While Sukiyaki Western Django may not be produced by Tarantino, he certainly had a stake in it. The western/samurai hybrid reeks of grindhouse excess, though it contains an even more miserable thematic basis. Here, Miike drew his inspirations from classic sources, loosely basing this work upon A Fistful of Dollars while showing shades of Henry VI and Once Upon a Time in the West as well. Other influences are abound in smaller strokes, but Miike seems content in showcasing these sources, which he knowingly can’t duplicate, and producing a trashy, ultraviolent ode to the male id. The entire film seems like an exercise on the filmmakers part to see just how creatively violent they can make it, reigning blood and bullets as if they were confetti at some twisted ticker-tape parade.

The plot is loosely followed at best. Two rival gangs occupying a town both fight to get a freelance gunslinger onto their side. Other subplots are come off as entirely unimportant and are only tools in furthering Miike’s vision of violence and sexual oppression. The aesthetic isn’t much better. Visually, the film is over-exposed and uninspired, trying to gain significance by being overtly avant-garde. The picture seems to try too hard to do all the wrong things while negating everything most deem as being important. This decisively American film, giving a modern day treatment to some rather beloved spaghetti westerns, inadvertently reminds us of the importance of cinematic progression by absolutely trashing what came before it. Cinema, as a whole, needs to take notice of these types of films and never go back to it again.