Ben Stiller hasn’t directed a film since 2001’s Zoolander, and in that time he’s acted with varying degrees of success in the likes of Meet the Fockers, Night at the Museum and The Heartbreak Kid.

Still, comedy has changed since Zoolander became a cult sensation. As Stiller probably knows all too well, comedy is a tricky and often fickle genre that constantly morphs and adapts to meet the current pop-culture and sociopolitical demands. 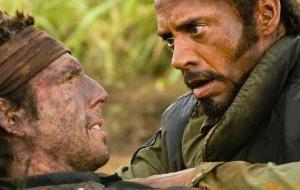 With Tropic Thunder, Stiller served as co-writer, director and producer and by doing so he took matters into his own hands with varying degrees of success.

Thunder takes aim at numerous Hollywood shortcomings by presenting a tale of a war film gone wrong. While the concept of movie production run amuck is hardly original, such a mainstream installment has not been dared in years. Success ensued. Seeing as many as 3,473 screens nationwide, Thunder scored an impressive $110.5 million domestic haul and it will likely be a DVD smash as well. Nonetheless, something in it strikes me as ill conceived.

From the movie’s opening we realize that no one is safe, a common comedic ideal, to be sure, but I never would have guessed that they would tackle things in such a simplistic manner. We are introduced to our main characters through a series of faux-trailers and commercials where we learn just how thin their construes are (probably something between paper and cardboard). Stiller plays washed-up action hero Tugg Speedman, a one-liner touting badass who seems condemned to sequel after sequel of his once popular franchise. Brandon T. Jackson is Alpa Chino, a rapper too caught up in whoring out his latest energy drinks and bars to be bothered with anything remotely artistic. Jack Black’s Jeff Portnoy is an indicative mesh of Eddie Murphy, complete with his penchant for fart jokes, and your prototypical celebrity junky. Finally and, most notably, Robert Downey Jr. portrays Kirk Lazarus, an overly self-demanding method actor who darkens his skin pigment in order to play an African American soldier.

Above are the basic outlines for our characters, at least as we are introduced to them, and they all represent overtly blanketing embodiments of contemporary cinematic figures. This begs the question of how justifiable said representations are. Of course, the whole “nothing is safe” school of thought can be again referenced but, even so, peers working in the same artistic community are usually giving an appeal, especially if they’re far more accomplished than those doing the lampooning. In Tropic Thunder, one comes to recall the inadequacies of those involved as they attempt to mirror that of others.

Similar considerations are given to those aside from the film-within-a-film’s cast, namely the director, his crew, and its producer. The director struggles with his actors, the location, and staying on budget, problems that parallel Francis Ford Coppola’s during Apocalypse Now’s production. Thunder is not intended to be a direct critique of Coppola (though one might question the meaning behind one of Speedman’s other projects, Simple Jack) but the idea makes for an interesting premise even though it isn't effectively realized. In an effort to save money and conquer the attitudes of his prima donna stars, the director ships them to the middle of the jungle to commence “guerilla filming”. Of course, things go awry. The director is killed, and the actors forced to fend for themselves against rebels, whom they think are extras.

It is at this point in the film where we reach a level of cinematic stagnancy and we realize just how thin our characters actually are. When forced to interact and grow, it’s evident that Stiller and company didn’t have an answer for the scenarios they planned on presenting their creations. Most jokes begin revolving around a “He who can yell the loudest is the funniest” mentality and the picture stretches its already thin content even thinner. Perhaps the plethora of cameos and supporting roles were meant to justify such a meager critique of the American film industry but, in the end, the movie is far too Hollywood to effectively lampoon it.