For years now, Pixar has made their bread and butter by breathing life and humanistic tendencies into the inanimate, the fictitious, and the fictitiously inanimate. Their developers seem most in their element when tempting to channel the imagination of a child and nurturing such creativity by weaning it on themes hearty enough for adult minds. WALL-E is no exception and it can be labeled as their most beautiful and ambitious film to date. The public took notice. The film grossed a whopping $223.3 million domestically during its theatrical run after peaking on 3,992 screens.

WALL-E’s ambition is indeed a standout aspect and its utilization of such lofty goals is partly what makes it such a rousing success. To be frank, WALL-E respects its audience, a rare attribute in American film these days and especially in animation.

Patience may be tested during the spectacularly silent opening but it is an important movement; a tonal exclamation point that demands attention. Here the Pixar team has outdone themselves in creating an environment of barren landscapes, enshrouded by dust and a feeling of unease. This is Earth and it’s an unsettling picture. 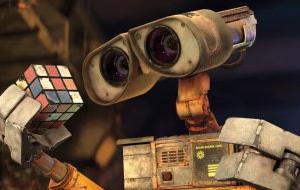 Of course, the plot eventually begins to emerge but it never feels forced. We learn that our cute, metal protagonist is the last working one of his kind and has been able to survive in such an urban wasteland through a series of self-repairs. Still, existence alone doesn’t seem to be enough of a motivator for him. WALL-E is aware that he alone is functional and that his directive of a literal urban renewal can afford to take a back seat to his curious tendencies. He is programmed to understand the principles of reuse and his scavenging often results in his capturing of personable treasures, of which movement is pinnacle. I find it is important to point this out as WALL-E, both the film and the character, is fascinated with function and purpose. Among the working objects he finds is a television and a copy of Hello, Dolly! through which he curiously studies the human race, a group of beings he has never encountered. In awe, he watches and subsequently emulates their movements and passions. Such an act may seem like a cute novelty at first but it marks the beginning of a much bigger direction in the film.

It is not until the Earthly arrival of robot EVE that we begin to see the purposeful strokes that the characters are painted in. EVE’s directive is to seek out life on our now desolate planet, a frustrating task made more frustrating by our smitten lead shadowing her. It’s cute, very cute at that, but to write it off as such would be a shallow critique. What he has learned of human culture and interaction is put to the test with her arrival as WALL-E strives to hold her hand and show his affection. We now have robots demonstrating human characteristics while, unbeknownst to us at the time, humans are becoming increasingly robotic.

It should be clear to anyone who has been even remotely exposed to this film that eventually our characters find themselves in outer space. Drifting through time, here the human race exists aboard the spaceship Axiom where they are damned by technological progression and reliance. Giving credit where credit is due, our screenwriters (Andrew Stanton and Jim Reardon) pay appropriate tribute to their influences, the most obvious being Stanley Kubrick’s masterpiece 2001: A Space Odyssey, which WALL-E borrows from in terms of its themes and aesthetic. Kubrick’s cautionary tale of dependency and devolution is mirrored here as mankind is depicted as a slovenly shadow of its former self. Humans no longer walk or directly interact but instead glide about on floating chairs and speak to each other via monitors. It’s a playfully grim depiction, one fancy-free enough to get the message across to children while causing some adults to shift in their seats. There really is no delicate way to effectively point out the world’s struggle with obesity yet WALL•E does so rather tactfully. Its intention is not to embarrass but to provide insight and its good-natured depiction of the human spirit proves that point.

It’s rare that a children’s, nay, a family film comes along and attempts to tackle relevant cultural issues while providing a sumptuous visual feast on its surface. WALL-E easily manages to do both. It has raised the bar for what movies of this genre can, and should, aspire to be.