There is little left to be said about a film whose popularity has spanned more than sixty years, has made a plethora of "Best of" lists, and has an equally impressive collection of awards on its proverbial mantle. The once chic attitude the film exudes has been proven timeless. Humphrey Bogart's iconic portrayal of the equally iconic persona Rick Blaine is often considered to be the role he was born to play. His loveable wit and lonesome tendencies are often cited as being attributes to a well realized character though many modern moviegoers fail to recollect what exactly these, and other traits, are embodiments of. He is, for all intents and purposes, America. While many people still quote lines from the film, the parallels between the lead characters and worldly events of the time are often ignored or under discussed.

To me, it seems rather wasteful to only look at this film on a superficial level, labeling it as a fairly dated genre picture that merely takes place in a socially relevant time. It does not use said happenings as an effect but rather a cause. Instead, we should keep in mind the writers' (The Epstein Brothers and Howard Koch) and director's (Michael Curtiz) intent and how its propaganda-laced structure works as an effective meditation on WWII relations. 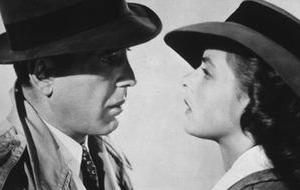 Similar films have adopted this device and to great effect. Alain Resnais's Hiroshima mon amour is a bit more obvious in its use of this motif. Coincidentally, many viewers draw parallels between the two films, but this is largely in part to passing references that exist throughout Hiroshima, not the way it uses such a characterizing device. It is a shame too. The miracle of Casablanca's screenplay lies not in the infinitely quotable dialogue but in its examination of policy by means of projecting countries as people, giving them personalities that we can care for and relate better to. It turns an otherwise charming and romantic tale into something truly exemplary.

The packaging is immaculate. Classically handsome with an aesthetic tinge of Moroccan tapestry, it will hold a cherished place in any collector's display. It screams, or rather firmly states, class. In terms of the packaging, my only complaint lies in the white slipcover living up to its name, by which I mean slipping. Due to the mass of the contents, it can be a difficult set to handle without dropping though this should hardly be a deterrent for those serious about the film.

Inside the box itself, four distinct cinematic innards await. The largest is a thin cardboard package that contains, of all things, soft leather items with the Casablanca logo, namely a wallet and a luggage tag. I find myself at a loss to decipher what exactly I think of these novelties. They take up an awful lot of space within the set and they will likely see no use from yours truly yet they still have a certain allure to them. I suppose it ties into the spirit of this collection and how it is designed more for die-hard collectors (hence the name).

Other inclusions are a bit more practical since they expand on the film and one's enjoyment of it. Most notably would be the newly printed photo book, which boasts a series of gorgeous portraits, which are accompanied by various essays. While it is not incredibly thick (50 pages), the photo book was certainly conceived with care as proven by its beautiful hard cover and use of high quality paper as its backdrop.

Another viscerally prominent extra is an envelope featuring the film's commercial based art, i.e. posters. Each are beautifully printed clearly on 5" x 7" cards and, as are the aforementioned leather articles, wonderfully showy items.