With D.J. Caruso's Eagle Eye, Shia LaBeouf continues to quickly build his resume into that of a bonafide box office draw. After the success of Disturbia (also directed by Caruso), Transformers, and Indy IV, LaBeouf's career seems to be rooted in ushering in a slue of relatable action and thriller movies for younger audiences. This particular picture follows suit and, like most of his recent efforts, it fared well at the box office. Peaking at 3,614 screens and grossing $101.1 million domestically, Eye seems perched to continue its good fortune on DVD. A motion picture such as this plays well amongst the home theater crowd and the recent influx in purchases of Blu-Ray players this holiday season will only help it along. 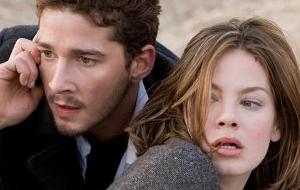 The movie opens rather generically. While a supposed terrorist is spotted attending a funeral, military men morally barter with themselves on whether or not to act forcefully, which is complicated by the fact that the intelligence they've been given is less than precise. The moral dilemma here is unapologetically played up and reduced to the simplest of terms. The president makes the final call, the behind-the-scenes men launch missiles, and everyone hangs their head in uncertainty and mourning. This rather trite display of crisis sets the main theme of the film into motion, namely whether or not the human mind is accurate enough to rely upon when dealing with homeland security. However, before we can let our plot get swept away in examples of throwaway philosophy and contrived turning points we must first meet our lead.

LaBeouf appears shortly after the aforementioned prologue concludes. He plays Jerry Shaw, who we are introduced to in the midst of a poker game. Clearly channeling Tarantinoesque dialogue and camera movement, this precursory scene does little in the way of development and instead just proves that young Shaw can outtalk his friends. The problem here is that this event has no practical real world application yet it is the foundation of the character. Other tidbits are mentioned throughout the film though the character remains largely unrealized.

Shortly after we are familiarized with the basic plot and its players, the narrative takes off at breakneck speed. Both Jerry and his counterpart Rachel (Michelle Monaghan) become "activated," meaning they receive a series of rather imperative phone calls demanding they follow instruction or suffer dire consequences. For Jerry, death; Rachel, the death of her son. The rest of the film follows these two, who start as strangers but soon become closely acquainted, as they are put through a string of pointless action sequences. It is evident that Caruso means to evoke romantic undertones between them but the actors' chemistry is non-existent. LaBeouf seems like a boy talking to a woman and the result rings more comical than true. Much of this imbalance is due to their obvious difference in age but their drastically different life experiences also makes the partnership an awkward one. Either way, their interactions are petty, though they do serve to move the actual story along.

The narrative, as a whole, is a linear mess, and that's putting it delicately. We have a phantom voice directing Jerry and Rachel. While the identity of the caller is not revealed until late in the film, we know they can control everything electronic, allowing them to supersede the FBI and government agents who are tracking Jerry and Rachel. After the "big reveal" so to speak, we see how obvious the picture's intentions are. Borrowing heavily from 2001: A Space Odyssey (there's even a supporting character named Bowman), it insists that an overreliance on technology will eventually lead to disaster. Unlike Stanley Kubrick's transcendent piece though, Caruso seems to use such notions as a novelty. While the implications are there, they exist in such broad strokes that they are barely worth mentioning. Our director seems to lay his focus on spectacle, to which he succeeds. These sequences may be pleasing to the senses but they are ultimately cheapened due to the script providing such poor context for them.

The action scenes, as well as most others in the film, are preposterous to the point of parody. While most outputs from this genre hardly concern themselves with realism, only few anchor their plots in such a real world and draw their ideas from relevant issues. Themes of contemporary terrorism and political upheaval are trivialized because of their juxtaposition with stylish, "fun" action. I fail to see the purpose in even bringing up this kind of ideology in a film if the director is not even going to attempt to do it justice. Still, such a practice seems to be all the rage these days and, while we can applaud films like Eagle Eye for keeping us viscerally interested, we can also condemn them for their exploitative political musings.