Many critics, present company included, would argue that Will Ferrell's decision to star in a series of manchild gimmick films shows a lapse in his progress as a comedic actor. Critics aren't alone. Based on the modest box office returns of Stranger Than Fiction and Semi-Pro, mainstream audiences showed that they aren't willing to blindly follow Ferrell. Still, Step Brothers fared better than most, grossing $100.4 million domestically. One would suspect it would do quite well in terms of DVD rentals and sales as well but the recent release of The Dark Knight will certainly make for tough competition.

The movie itself is really nothing new since it's basically a combination of the personas Ferrell continuously depicts, with few changes. The main difference lies in the way that Ferrell and Co. present his latest manchild creation. 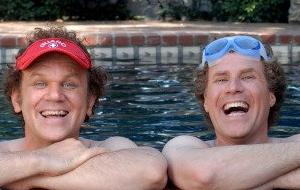 Both Ferrell and his frequent co-star John C. Reilly (playing Brennan and Dale respectively) are men with a refusal to flee the nest. They come to meet each other and share their odd socially restraining predicament after their parents are married during the opening sequence. While the focus of the film is certainly on Brennan and Dale, the whole marriage portion feels rushed and it's not particularly funny. Nonetheless, I'll concede that Brothers never strives to be a good film in a formal sense so I'll seek to complain elsewhere.

The comedy present throughout is based almost solely on two devices: interjecting crude language into non-crude scenarios and the aforementioned manchild theme. The two behave like children, fighting and squabbling like territorial animals and swearing insistently in front of their parents.

Brennan and Dale both live off their parents means and, as the film hypothesizes, have never grown up simply because they were never forced to do so. Mentally, they are actually rather competent figures, evident by both succeeding late in the film after being given the sink-or-swim treatment. At the very least, the idea that they do accomplish something when forced to gives what came before it a little weight. The film is given some purpose by director Adam McKay advocating parental responsibility, as timely a consideration as there is. This is a passing notion though. In the wake of Brennan and Dale following the straight-and-narrow, McKay and Ferrell opt to subvert the characters back to their somehow charming yet primitive personalities. The dubious parents long for their children back and the boys oblige. It would be one thing if McKay would go a bit further, showing how love and maturity are not mutually exclusive but instead he revels in rather extreme poles. Of course, comedy does not need to be overly profound but menial inconsistencies should not be lauded either.