The fascination between life, death, and the process of crossing over has always been a fruitful one for artists to explore with varying degrees of success. Of course, the likes of Ingmar Bergman and other existential masters generally delve into the weightier matters surrounding mortality and faith while those on the more comedic end of the cinematic spectrum tend to revel in the humorous what-ifs of the unknown. Ghost Town certainly falls into the latter category and, while it does not produce anything truly new, it has a unique air and charm to it that critics seemed to take to. Audiences did not. Relatively low exposure and lackluster star power more or less doomed it from the gate. It only saw a high of 1,512 screens and pulled in $13.3 million. It's rush to DVD might prove successful given that it is different than a lot of what is gracing shelves these days, though I wouldn't bet too strongly on it. 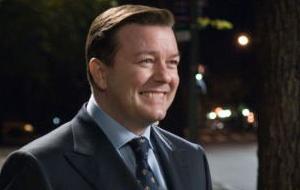 I'll openly admit that I do not share the love for this film that some critics and filmgoers have demonstrated but, nonetheless, it is better than your average rom-com fare. It's a pleasure to see Ricky Gervais in a starring role, despite his full-range of comedic talents being ultimately stifled here. He plays Bertram Pincus, a British transplant, who works as a dentist in Manhattan and whose name is of constant ridicule. This, among other things, is annoying to him. In fact, personable dealings as a whole leave him peeved and his way of coping is to simply look out only for himself. In the crowded environment of New York City, such a practice seems rather commonplace and there is something to be said about the air of social malaise that hangs over the city. Still, to address this as a main theme of the film would be misguided, as it would also mean the movie itself is setting some lofty, unfulfillable goals. No, this is not the case, though an interesting notion remains as to whether or not Bertram is actually worse than most New Yorkers or whether he's our focal point because he's actually a good man deep down.

The character development as the film opens is rather standard. Bertram acts rudely to his acquaintances, we learn of their relationship to him, and hints are given as to where they are headed. However, it's not until after the narrative focal point - a near death experience - that the story begins separating itself from your typical genre flick. As our lead saunters down the streets of Manhattan, something happens. He makes his typical callous remarks to people passing by and they begin following him; hoards at a time. He can suddenly see and communicate with the dead and, in the vein of M. Night Shyamalan's The Sixth Sense, they all want something from him in order to make peace in the afterlife.

Of course, the story would not be complete without a head ghoul, and in this case it's Greg Kinnear's Frank. Being morally flexible as a human, Frank aims to manipulate Dr. Pincus into performing actions that satisfy his appetite, not his soul. As it turns out, the situation calls to mind the phrase, "The blind leading the blind." Frank, who cannot, even in retrospect, see the error of his ways, guides Bertram, who is ultimately clueless when it comes to interaction and intimacy. The result is a fairly lightweight film, one that's entertaining enough though not as whimsical as it probably deserves to be. Still, in the wake of what else has been put out lately, this is not a bad route to go in the way of new releases.