Markedly cultural but generically executed, Nick and Norah's Infinite Playlist marks an ambitious but unsuccessful effort for director Peter Sollett, largely due to the fact that it caters to a specific demographic. Because of this challenges arise, namely crafting a movie dealing with teenage sexuality and drinking while maintaining a PG-13 rating. Compromises must be made; notions must be softened. In terms of box office returns the public didn't buy into what was to be inevitably (and inappropriately) labeled as "Juno-Light". Playlist only grossed $31.5 million on 2,421 screens. Its wide-release run was limited to six weeks. 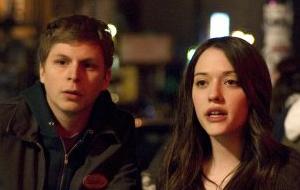 A series of coincidences propels the narrative which centers around a night of our titular characters. At the film's opening they are strangers; two teens aloof in their respective worlds. The picture often delves into exploring the nature of these meta-worlds, showcasing their class and gender differences and projecting these traits onto the characters. The result is an attempted pictorial of the cultural clash facing high school students - an attempt that ultimately fails. Nick O'Leary (Michael Cera) epitomizes the lovelorn, middle-class scenester who pines for his stuck-up, well-to-do ex Tris (Alexis Dziena). Norah Silverberg (Kat Dennings), a schoolmate of Tris', comes from a wealthy Jewish family who hopes to find her true calling in college; she has grown tired of living in her father's shadow. Other characters include Nick's homosexual band mates, Norah's friend that drinks too heavily too often, and a plethora of other cardboard cutouts.

It's a shame really - the filmmakers are willing to focus on aptly developing the characters' surroundings but not the characters themselves. This would be acceptable if subtext existed, something that allowed the viewer to read into the personalities of our leads. Alas, there is none and we are left with a wave of stereotypes. Still, the overall message of the film seems to aim higher than this, attempting to show how music can bridge cultural and social gaps. This is the side of the movie I admire, even if its exploration of the topic is limited. It is interesting to ruminate over how art can bring people together but it's frustrating to see such a topic addressed in light strokes. Of course, I did not expect something particularly existential or weighty but when such opportunities arise in one's script I'd like to see them explored a bit. Sadly, Playlist is too invested in wrapping up its story's loose ends to really be taken seriously. Too bad the story itself is uninteresting.