Marley & Me is about the heart-warming relationship between a dog and his owners. John and Jennifer Grogan (Owen Wilson, Jennifer Aniston) have just gotten married and everything seems to be going well for them in life. As is usually the case with newlyweds, the wife has big plans for the future, including having children. Typically, John is not ready for children just yet. What does he do? Well, he buys her a dog to feed her maternal instincts and, thus, the story begins. 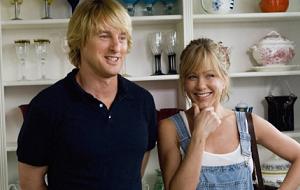 Marley plays out in typical "family film" fashion. As years go by, Jennifer and John become more successful and have busier schedules, while Marley becomes more and more incorrigible. Marley and the owners clash and share many frustrating misadventures together. Without giving anything away, John and Jennifer come to an expected understanding and resolve their differences with Marley and they all become a big, loving family.

American audiences absolutely adored Marley to the tune of $143 million domestically. However, as much as I wanted to love this movie, I still think it hits the genre at a sub-par level. On the surface, it may seem like it has all the ingredients for a perfect family film, but as the credits roll I couldn't help but feel like I needed more. The film just didn't make a strong enough case for me to sympathize with the titular dog, considering that he's more annoying than endearing.

In the film's defense, the story is based off the non-fiction book written by John Grogan himself, which is really just a collection of stories of John and his rambunctious dog. The filmmakers may not have had a whole ton of room to work with what Marley does in a scene, which means that the book is inevitably better than the movie.

Marley would have benefited greatly from more plot development and less "silly dog" mishaps. Wilson and Aniston don't work horrible together, but then again they don't send off fireworks in terms of couple chemistry either. Alan Arkin is responsible for 70% of the movie's humor, while Kathleen Turner plays such an insignificant part in this movie it's almost not worth mentioning.

For those who are looking to waste two hours of their time, but wouldn't mind spending it watching a cute dog, doing silly things, without having to think or care about the plot ... well this movie is for you. To those who fancy a more layered film, that makes you think and would leave more of a lasting impression on you ... I'd say look elsewhere.

As for the DVD itself, there are plenty of extras to excite all the dog fans. Including over 25 minutes of deleted scenes, a gag reel and several featurettes. One of them showcases the many dogs used on set, while another even has an ‘interview" with Marley himself.