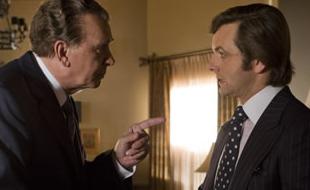 Considering that he's largely a commercial filmmaker, it comes as a surprise that Ron Howard's latest film not only performed poorly at the box office but was also given little chance to do better. Only peaking at 1,105 screens, Frost/Nixon fell victim to a low-key release and a relative lack of exposure. Compared to Howard's The Da Vinci Code, which arrived at theaters with a blitzkrieg of advertising and grossed over $200 million, F/N quietly snuck in and out of public sight with last years other award season dandies, only banking $18.5 million domestically.

Being sourced from a play (also written by screenwriter Peter Morgan), F/N is predominately an actor's piece, though Howard aims to visually and narratively elevate the story in his cinematic retelling. Actors are still given plenty of face time, though Howard's focus seems to be on the build up rather and what goes on behind the scenes rather than the interviews themselves. The first half of the film is largely expository, shaping a fictionalized vision of our characters and the world they lived in back in 1977. These scenes are straightforward and primarily serve to introduce us to the main players David Frost and Richard Nixon (Michael Sheen and Frank Langella, respectively), as well as the company they keep. We learn that Nixon is an intelligent, calculating man who cares considerably about his public image. While this may not sound like an adequate descriptor of a man hated by millions, Langella's depiction adds an air of human frailty to the former president, one that nicely compliments the film's broader themes. Nixon is shown as being not so much reclusive as reserved, still accepting of the public spotlight but only under his conditions. The world wants to talk about Watergate but he'd rather discuss his memoirs, hoping people will see him as a logical man instead of a political monster. In order to convey this, he agrees to a series of television interviews, interviews that are ostensibly purported to showcase Nixon the person. Enter David Frost.

Frost or, rather, Sheen's portrayal of Frost, is that of a carefree British playboy. According to the film, his successful career in television has grown somewhat stale, causing Frost to tempt bigger, more meaningful things. Thus, the landing of the Nixon interviews proved an enormous opportunity for him and, from a narrative standpoint, an enormous opportunity for our filmmakers as well. Having two main characters of vastly different sociopolitical backgrounds but of equal celebrity affords Howard the chance to elevate his film above a standard docudrama. In some ways he succeeds. The interviews are nicely portrayed not as discussions but of tactile warfare. While no physical blows are thrown, Nixon toys with Frost's boyish naivety, completely outclassing him in their first official meeting. Comparisons to boxing are drawn and rightfully so. Howard does well in paralleling the psychology of a fighter to that of a debater, which adds weight and immediacy to the conflict. Both the men and their underlings have much at stake in the outcome of these interviews in terms of fiscal security and personal fame. While Nixon sees the opportunity as a way to publically excuse himself, Frost's goals instill dichotomy within him. His motives, which shift from self-promotional to borderline self-righteous, create a character arc that demonstrates man's inherent search for truth. Naturally, Nixon's mission isn't one of truth but of clearing his name, though he too struggles with his conscience. The difference in the men is in their nature, which reflects how they approach these thoughts of celebrity, reputation, and what constitutes justice. Though a handful of themes are present, Howard's film does little by way of exploring them outside of superficial means. The movie is technically competent but hollow in an artistic sense, laying the groundwork for the exploration of thematic concerns but never building upon it. A chance wasted for Howard, but a step in the right direction for him nonetheless.

Because the film is a mixed bag of archival footage, reenactments, and faux-interviews, creating a cohesive aesthetic proved a difficult task and, again, is approached in a by-the-book fashion. The image itself gives the impression of datedness through uses of softer focuses and color tinting, both of which are evident on the Blu-ray transfer. The picture exhibits a good amount of detail though pales in comparison to other BD releases such as Quantum of Solace and Sin City. The otherwise linear narrative is interlaced with a series of commentarial interviews from the supporting characters, a motif that comes off as lazy and weak. Narrative criticisms aside, these scenes are presented with a grainier, washed out image, a stylistic choice that I feel detracts from the viewers' engagement. Meanwhile, skin tones seem natural enough but show notes of yellow filtering, which is perhaps intended to give the picture a more nostalgic feel. As a whole, the picture is certainly above the quality achievable on DVD -- it's fairly crisp and completely clean. Still, the relative lack of aesthetic concern demonstrated on Howard's part hardly justifies purchasing the Blu-ray version, especially considering the higher price tag.