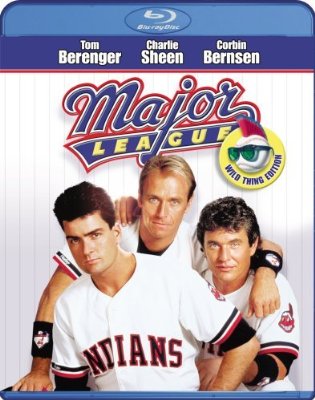 In some ways, this release is entirely unnecessary, at least in terms of the visual upgrade the picture receives from the BD treatment. This isn't to say that the new Paramount Blu-ray is without its benefits, it does look markedly better, but Major League is a movie celebrated for its charm and self-admitted silliness more so than its visual prowess. The movie is not a cinematic revelation. What it is though is an acknowledgment of what professional baseball (hell, all sport) actually is - entertainment. Though ballparks have acted as stages for some of the more dramatic performances that the television generation has seen, baseball boils down to men playing a boys game. Now, I'm aware that baseball can be inspirational, even cathartic, but these labels are somewhat tangential, their stories extensions, limbs if you will, that sprout from the sport's core. In its purest form, baseball doesn't have a deeper meaning - it's just a group of guys (and/or gals) playing ball. And, though I contend that writer/director David S. Ward doesn't demonstrate an acute understanding of film, the man does know his baseball. As a movie centered on my favorite sport (and first love), this is all I can ask for.

Gimmicks run amuck in this parody of America's favorite pastime, but unlike other comedies, Major League embraces its gimmicky nature and uses it to form memorable characterizations instead of as tired narrative devices. In this, I find its importance underscored. "Wild Thing" Rick Vaughn (Charlie Sheen), Roger Dorn (Corbin Bernsen), Jake Taylor (Tom Berenger), Pedro Cerrano (Dennis Haysbert) and Willie Mays Hayes (Wesley Snipes) have all become such heavily recognized baseball names that their stories are all but accepted as major league canon. All add uniquely hilarious voices in their odes to struggling ballplayers and, although not every base is covered, the picture does well in demonstrating how inherently diverse such a group would be and the subsequent obstacles their differences-racial, spiritual, or economical-stir up. Still, the picture is about bonding and overcoming these obstacles, which range from such commonplace occurrences like sleeping with a teammate's wife to finding a live chicken for a pre-game voodoo sacrifice.

Throughout it all, the film's greatest accomplishment is realizing its characters are ballplayers and, thusly, letting them do the obvious and play ball. Instead of delving too much into the off-field antics of the players (which are seen, but not emphasized) much of the actual comedy takes place within the confines of the sport itself, be it at practice or during game situations. These game time shenanigans are largely complimented by boozy commentator Harry Doyle (Bob Uecker) whose quips have become famous enough that they can be heard be quoted wherever base sports are played.

Major League is a picture that's far from flawless, but approaching it in my usual critical manner would be an exercise in futility. The movie has earned its place, garnering more laughs and repeated viewings from yours truly than almost any other film I've seen. Would I generally double-dip and pick up the Blu-ray? Probably not, as the picture's pros work independently of its aesthetic. That being said, the transfer is a definite step up from the original DVD release. Blurring around faces and other objects have been replaced by crisp edging and the color palette seems to have undergone a definitive shift towards an overall redder look. This is most obvious in faces, which look a bit unnatural, as if half the characters spent slightly too much time in the sun. Yellows also seem more apparent than usual. That aside, the coloring here allows for the reds of the Indians' uniforms (and of the Jacobs Field seats) to look particularly brilliant, even if the image, as a whole, isn't as sharp as it should be. The improved Blu-ray disc does exhibit more detail than the standard-def DVD but is a bit soft and shows examples of vertical scratches and blemishes that went uncorrected from the source print. Overall, it's not the best release we've seen from Paramount in a technical sense but, as far as repeat-viewing potential is concerned, the movie is top-tier. Enjoy it by yourself or with a beer or with friends and a beer, but don't forget the most important thing - enjoy it.