Christopher "Notorious B.I.G." Wallace's life has all the makings of a successful music biopic. A humble beginning. Falling in with the wrong crowd to make a living. A meteoric rise, followed by a heartbreaking fall. Unfortunately, despite having all of those ingredients, Notorious is not a very strong film. Director George Tillman Jr. allows himself to be bogged down by genre staples, instead of providing a different and exciting take on them. 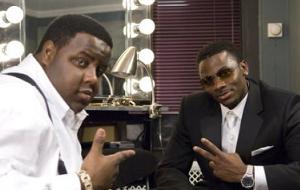 Audiences also must have saw the promise in this film, because Notorious opened to an impressive $20.5 million from only 1,638 locations. Of course, once word got out that it wasn't that great, the biopic managed to reach a total domestic cume of only $36.8 million.

In the title role, newcomer Jamal Woolard delivers an incredibly convincing portrayal. The film's ultimate failure is certainly not his fault, and if anything he elevates the material. Notorious portrays Wallace as a saint one second and a sinner the next, which often comes across as inorganic, clunky and forced, rather than a natural extension of the story. To Woolard's credit, he pulls off both the dark and the light side of Wallace's personality very effectively despite being bogged down by dramatic handicaps.

It's quite obvious that both Wallace's mother, Voletta, and his best friend/business partner Sean 'P-Diddy' Combs had a hand in producing the project, because they both comes across as preachy and artificial in the film. Combs isn't a character, so much as the human equivalent of a motivational book and Voletta is intelligent and righteous one second and knuckle-headed (she mistakes drugs for mashed potatoes) and overly forgiving the next This is unfortunate because Voletta and Combs are played by the talented Angela Bassett and Derek Luke, respectively. Both thesps could have done so much more if they were given better material to work with.

Still, for all its faults, Notorious should do well on home-viewing platforms. It's a movie that die-hard B.I.G. fans, of which there are many, will want to own even if it is far from perfect.