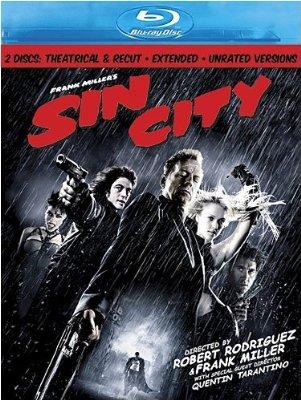 Finally making its way to Blu-ray is Sin City, a tableau of a Frank Miller graphic novel that's brought to life through the eyes of helmsman Robert Rodriguez. All in all, this film is about style and specifically invests itself in producing a true, cinematic representation Miller's work. This goal, while admirable, is dependent on the meshing together of elements from independent stories (with consistencies among settings and characters), a problem that proved difficult in forming a cohesive narrative voice. What resulted was an interesting visual spectacle that was true in tone but was compromised by its insistence on tying together events, events only related by happenstance. However, aside from the BD transfer, Sin City was also treated to a recutting, which allows users to watch the extended versions of the assorted stories as singular features. This is a nice touch that allows for a truer adaptation of the source material, even if the newer material only emphasizes the viscerally driven fanboyism of Rodriquez's film. The end product is obvious, but intended to be. The movie itself is about putting Miller's still images and stark characterizations into movement, to which it succeeds.

If the success of the movie is as dependent on the visceral as I suggest, it's only fitting that the Blu-ray transfer be exemplary, which it is. The high contrasting black and white imagery creates wonderful illusions of light and space in frames full of detail. A soft grain encompasses the picture, allowing for a natural, clean image that's free of excess noise, even in dark backgrounds. Blacks are endless and foreboding and work well with Rodriquez's style, as characters constantly lurk within the shadows. Apparently, the digitally generated backgrounds translate well to the new format, and the gaps between the digital and the real are seamless. Fans of the movie (and of action-laden, stylistic fare) are in for a treat with this release.