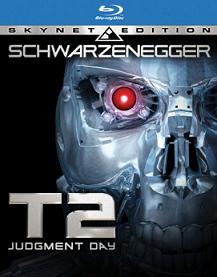 Sometimes it's best to not think of Arnold Schwarzenegger as a human being and no, I'm not saying this because I'm a democrat at heart, nor because he so famously depicts a futuristic cyborg in this franchise. The reality is that "Ah-nold" is a brand, a symbol, a marketing tactic. The man has charisma; in fact, I'd argue the man is charisma and it's this very attribute that makes his films overwhelmingly popular, even if sometimes its only a cult level. Still, it should be said that the man has talent and that the particular "brand" he's shilling is not a corporate construct but his own-from his bodybuilding days to his foray into politics, his bread and butter has been selling his image. Schwarzenegger's presence is a memorable one and his characters are typically designed as large enough to hold the weight of his own personality. Unlike other actors (*eyes Sandler*), this larger-than-life persona never gets in the way of the film's end product. Terminator 2 is the perfect example of this.

The action genre has always been a crowd pleaser and with films such as Taken becoming box office sensations, its popularity is as evident as ever. While many directors often get it wrong, there are filmmakers that know there's more to an action sequence than pointing the camera and blowing things up. They understand how to evoke space with their lens, interestingly frame movement and use these scenes to compliment the narrative. Though his name wouldn't be at the top of my list of action filmmakers (*nods to Michael Mann*) James Cameron is a competent genre director; his seamless use of combining technological advance with storytelling prowess make up for a relative lack of artistry.

As a director constantly embracing the new (i.e. Avatar), I find it a bit ironic that Cameron made this movie, which pinpoints technological advance as man's ultimate downfall. I know, I know, it is just a movie, and the severity of its "message" is purposefully ambiguous. In some ways, namely thematic ones, T2 plays as the action genre's response to 2001: A Space Odyssey, which also lends commentary on man's overt reliance on machinery. Though Kubrick's piece is far more weighty and important, Cameron does a suitable job in keeping his movie relevant in terms of its representation of theme and culture. The film is decidedly 90's - its dialogue, costumes, and aesthetic all act to: a) teach Arnold's terminator, a creature from a war-ridden, cultureless time, about our humanity and era, and b) play up our cultural strongholds enough that viewers will find something to relate to.

Earlier I spoke of the irony between the film's themes and Cameron, though I'd also like to point out that T2 has been released for home viewing approximately 5,000 different times (this number may be slightly off), each with "exciting", "new" special features. The latest Blu-ray release also boasts such extras, along with a new and improved BD transfer that disappoints pretty thoroughly. The picture attempts to recreate a natural feel that's inconsistent in way of its color alteration and digital noise reduction, which sacrifices detail especially in backgrounds. It should be noted that two versions of the film are available with the Lionsgate release, the theatrical one being too heavily color-filtered and the extended edition being too light and washed out. The audio is also subpar for a BD release and there seems to be an emphasis on the loud more so than the subtle. My speakers boomed but the lack of audial clarity left little impression on me. Neither the newly tweaked image or the audio track are demonstrative of 1080p capabilities and, when a film's visceral qualities are this lauded, one can only be disappointed by the relative lack of concern evident in this release. The menu is also obtrusive by design; chapter stops are inconvenient in how they navigate and the animation is needlessly garish. If you own one of the previous 5,000 editions of the film, I'd recommend sticking with it, but those new to BD might benefit in giving this a rental, if only to see how the image translates to the newer technology. But, as the movie proves to us, "more advanced" isn't always "better".