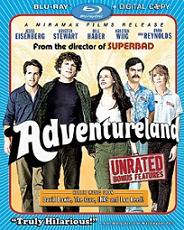 With a vacuously poppy, gag-a-second marketing campaign, Adventureland looked like another standard issue teen comedy with passé characters and little emotional weight. Knowing it is set amongst a glossy 1980's backdrop didn't help its cause either, as the decade of excess has become a chronological crux for filmmakers of late-a practice more in tune with our stylistically cyclical nature than the times' possible implications. Still, somehow director Greg Mottola-who had success with the throwaway comedy Superbad-exceeded expectations and made a thoughtful, at times artistic picture. Audiences didn't take to this new direction, and Adventureland made just over $16 million on a peak of 1,876 locations.

In eschewing today's typical comedic wells and instead drawing from the more humorous foibles of trial-and-error fraternization, Mottola has gone beyond creating a small herd of characters who merely jump through fittingly raunchy hoops and replaces them with socially and, more importantly, emotionally aware young leads. Jesse Eisenberg plays James-a recent college grad who's well conditioned at coping. Having learned that his family is facing a financial crisis, James is forced to put the kibosh on his exactingly planned trip abroad in order to raise money for an education he's no longer class-privy to. Here he meets the film's somewhat token supporting players, including love interest Em (Kristen Stewart), nerdy friend Joel (Martin Starr), and alpha male Mike (Ryan Reynolds). Though they're not without a sometimes generous dash of cliché, the movie's clever dialogue adds humor to their foibles, regardless of how commonplace they are.

Tonally, Adventureland is sincere and bittersweet. Mottola weighs some surprisingly mature themes against an unapologetically 80's backdrop. Celebratory in its cultural rigidity, Adventureland's world is one that's unafraid to showcase the good, the bad and the ugly of the times. The characters play well off this sentimentalist air, and a nice level of care is demonstrated in how they progress emotionally. Though not without its problems, Adventureland is a pleasant output that's brave enough to put dramatic concerns ahead of comedic ones. The narrative focus seems on bringing the story full-circle and not cramming in tangential side plots and absurdist non sequiturs in order to score laughs. This is a film that finds humor in the niches of personality and habit. If Mottola can continue to hone his wit and craft, he may very well become a name worth following.

Because the film is so dependent on this hyper-nostalgic 1980's air, judging the image quality of the new Miramax BD transfer is a bit difficult. The color palette seems appropriate given the era and the bit of warmth I detected compliments the movie's sentimentalist feel. The heaviness of the grain structure is above average; this seems intentional to, again, preserve its neo period piece feel. Background colors distinguish themselves nicely from each other but the contrast seems matted at times and overdone at others. Still, nothing seems out of the ordinary as far as vibrancy is concerned, as the movie tends to exist more on a slightly caricatured side of reality but not to the point of pomo artifice. The sound, which is apt, isn't a predominant feature of the film, though the non-diegetic noises of the amusement park are represented nicely. I'd say that this Blu-ray release is an earnest attempt at replicating the theatrical version and is a fair match for the movie's quality.