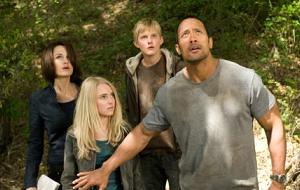 I, Joe Galm, can smell what The Rock is cooking and it's a liberal agenda. Dwayne "The Rock" Johnson-who has apparently ditched his combative moniker-stars in yet another Hollywood reboot comprised of nostalgia and flair with a generous dash of pandering political allegories. Sentimentalists everywhere will pooh-pooh the idea outright, as the action-dependent narrative seems more like an assault than a celebration of memories past. Alas, my last viewing of Race's predecessor-Escape to Witch Mountain from 1975-was on a Betamax player, so I had to find other reasons to dislike the picture. It happily obliged. Still, the kid-friendly flick managed to pull in $67.1 million domestically, acting as a reasonably effective bridge between the stagnant spring months and the blockbuster-heavy summer.

Over the past few years there seems to be some foregone conclusion that, if one is to feature aliens in their film, they need to be representative of something greater. Aliens can no longer just be aliens and xenophobic implications just aren't enough. Naturally, American filmmakers have not only entertained but romanticized the idea that such invaders be reflective of ourselves and, thus, should reflect our problems-namely our current Middle Eastern conflict. The two starring youngsters Seth and Sara-played by Alexander Ludwig and AnnaSophia Robb-are visitors from another planet, one that has depleted the resources it needs to sustain life. Apparently environmental degradation is not exclusive to humanity. The "kids" have come to our planet to aid the cause of their parents; scientists whose aim is to sustainably replicate the needs of their planet by studying ours. Meanwhile, an authoritarian government has imprisoned the environmental idealists and schemes to use advanced weaponry to simply occupy Earth. Sound familiar? It should.

The motif of using aliens to parallel our own shortcomings is not a novel one and the film's message is equally trite. Most exposition is covered in the brief spurts of dialogue that occur when things aren't exploding. With this, the film's characters are hardly insightful constructs, though the movie might be more grating if they were given additional lines-a classic catch 22. Johnson plays his token nice guy with a degree from the School of Hard Knocks and, despite enjoying his charisma, I wish he'd bring something/anything new to the table. His character Jack Bruno (an ex-con complete with tough guy name) is a bit of an idiot but his newfound morality is supposed to make up for this. Still, I can't see this or any of his other family-friendly roles as anything but more pacified versions of Vin Diesel in, well, The Pacifier. Other players range from sci-fi enthusiasts to research scientists and all are convenient cut/paste jobs from previous pictures.

The movie's atmosphere is cramped visually, as director Andy Fickman seems overly concerned with spectacle. The post-modern art/set design comes off as hardly imaginative and wholly arbitrary. Slews of chase sequences propel the narrative but these scenes are of visceral immediacy and lack tension and purpose, reading primarily as generic. Children may enjoy the blasts and bangs but the film's political implications will likely soar far over their heads. Ideas of diplomacy and logic conquering war and fear mongering are important ones, though are presented at an all-too-safe distance here. Besides, parents have been perpetuating the line, "Use your words, not your fists" for generations now. Do kids really need a movie that merely repeats that lesson? I think not.

Although the film is lacking in quality, Disney has again produced an above average Blu-ray release. The image displays a vast array of tones and hues, though skin tones demonstrate a somewhat flat quality. A convincing grain structure is present throughout the picture, which is natural and consistent. The film's special effects hardly wow, but work congruently with the movie's practical backdrops. As usual, the Digital Intermediate mastering helps. More impressive is the uncompressed audio, which provides the ground-shaking visceral impact that such action films demand. All in all, Disney's efforts make a poor film watchable and their three-disc packing (BD, DVD, and Digital Copy) is more than convenient.