The Last Days of Disco

In one form or another, everyone belongs to a subculture-a sort of meta-society comprised of those sharing a common interest or passion. Because these groups are comprised of those closest to a subject, they oftentimes become the target of criticism, as the perspective of others is generally limited to their own interests. Understanding others merely for the sake of understanding seems like a wasteful practice-such information is hardly relevant to our own, closeted lives. Whit Stillman is a director who thrives on exploring sub-cultures-particularly those that in some way intersect-in order to illustrate the nuances of human interaction. In this, his characters are generally socially savvy archetypes from his own encounters. They're almost all educated, witty, absolutists who fain interest in others' viewpoints while intellectually dismissing them. These are not people the everyman wants to associate with but is in some way forced to. Accordingly, The Last Days of Disco-Stillman's most "recent" output- features players that most viewers won't relate to on any superficial level, but they should understand their plight. These are working men and women who are part of something bigger than themselves. They are part of Disco. 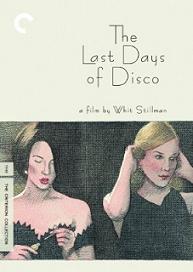 With witticisms comparable to Noah Baumbach's Kicking and Screaming, Stillman directs a group of Manhattanite intellectuals who are bored by the daily grind and thus seek nightly refuge at a Studio 54-type club. As some directors evoke space by manipulating the visual composition of close and medium shots, Stillman evokes cultural notes by manipulating the world behind his foregrounded characters. This world is one that marks a transition of trends in the early 1980's and it's portrayed on two different levels: how society is changing in a broad sense and the effects these changes have on the characters. The big picture exhibits strokes of sexual experimentation and orientation, personal escapism, yuppie classification, drug prevalence and class distinction-all worthy cultural markings that provide context to characters who would otherwise be a collective of rudimentary personas. Though all possess free will, exercising individualism amongst such turbid cultural waves is easier said than done. Thus, the main players tend to annoy, both viewers and themselves. In some ways they unavoidably fall victim to a way of life that can't be sustained, in other ways they victimize themselves for social gain. The point of Last Days seems not to explain or justify such behavior, but to explore it.

The cast is largely comprised of familiar indie film faces from the 1990's-Chloe Sevigny, Kate Beckinsale, Chris Eigeman, Matt Ross and Matt Keeslar all head a fine ensemble effort. Sevigny and Beckinsale standout as Alice and Charlotte respectively, primarily due to the narrative's insistent focus on how the pair adapt to an ever-changing urban environment. Though their class level affords them opportunities most would kill for, they live somewhat modestly, as though they're attempting to associate with the working class New Yorker in order to avoid social labels. Alice in particular eschews trends and even changes her drink of choice out of conformist fear. She's less self-assured than her frigid counterpart Charlotte-whose selective ambition allows her to come off as comfortable in most environments. Charlotte seems to either know or, rather, accept her place amidst the times while Alice is less than contented with hers.

Much has been made of the sharp-tongued dialogue that's laden throughout the picture, and rightfully so. Each player has a certain level of reflexivity-both of society and self-that differs from their peers, which tells of a need to accept man's self-based nature of perception. Stillman carefully balances the musings of his subjects so that they provide commentary on their era of time without being emotionally distancing. Conversations range from mundane talks of work to hypercritical analysis of beloved Disney favorites in an attempt to explain how the seemingly innocuous can be taken with abrasion. It's all very insightful, if a bit tongue-in-cheek. His directorial approach, aesthetically speaking, is what I would call "uncinematic" but the booming soundtrack and nightlife eccentrics make for some memorable moments, aided further by a special, omnipresent energy. As a whole, the picture is as much an ode to a former social crux as it is to those twentysomething ages in which people search for themselves. Both will always be a part of those involved, as long as they're remembered.

I'll start with the good: Criterion continues to produce unique cover art and the hand drawn illustrations for Last Days is of no exception. It recalls their work on Metropolitan and adds to the somewhat artificial air of the characters.

"The bad?" you may ask. Well, the extras are fairly piddling, especially by Criterion's standards. If anything, I enjoyed the deleted scenes only because it gave me a better appreciation for the high-def remastering of the actual film. The other featurettes, including an audio-only supplement of Stillman reading, add little to the movie. I realize there were probably difficulties in even putting out the film given its relative unavailability prior to this release, but a picture of this quality deserves better.