When watching this film, I really wanted to like it. This isn't to say I go into other movies with hopes of disliking them, but I can't help but root for an underdog and Battle for Terra is certainly that. Without the technological backing of a company like Pixar or DreamWorks, Terra's animation was bound to look primitive by our spoiled, modern standards. That being said, evaluating Terra by such lofty criteria seems like a waste of time, as such a practice ignores content and undermines the movie's formal language. The step-down in animation is apparent, but the artists did well in creating some interesting compositions and uses of space. No, the biggest blow of being a smaller animated release isn't related to a lack of artistry but one of commercial leverage and, after a lackluster opening weekend, Terra quickly found its way out of theaters and finished with only $1.6 million. 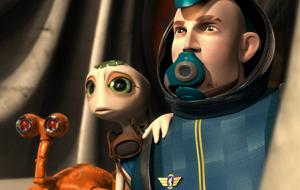 To be forward: there is nothing novel about this movie. The plot is another poorly cloaked liberal device that uses aliens in a tired, token fashion to flesh out cultural gaps. This time humans have (again) exhausted our vital resources and are (again) floating through space in hopes of finding a life sustaining planet. Eventually, future generations come across an inhabitable planet they-in an act of manifest destiny-name Terra. Despite being climatically suitable for humans, the planet lacks oxygen -the provision of which becomes man's plan for eliminating native life. This provides the film's basic moral conflict-determining cultural superiority or: who should live and who should die?

Director Aristomenis Tsirbas makes his agenda clear from the movie's opening by painting the native "Terrarians" as economically efficient, peace-loving beings who celebrate life and live in union with nature. They represent a race more progressive than our own, placing an emphasis on perpetuating life, thus advancing beyond the need for war, or even advanced weaponry. Though this makes them ostensibly vulnerable to outside attackers (not that they actually expect interstellar war), it allows them to live without authoritarian fear, as their political philosophies eschew the need for a governing presence. In fact, only a small group of elders have any clout whatsoever and, although they are initially misrepresented as an overtly strict religious order, their primary function is to carry on the tradition of social unity.

What separates Terra from similar outputs is its somewhat ambitious bleakness. Instead of merely trashing Earth as in WALL-E, the human characters of Terra destroyed both it and Venus and Mars. Impressive. This isn't to say that bleakness is inherently a good thing, but here it marks a bold step in paralleling fantasy to the sadder truths of reality. Still, I don't condone this approach entirely, as Tsirbas himself uses fear tactics to criticize the fear mongering employed by over-zealous right-wingers. While the movie suggests progressive attitudes on dependency and coexistence, it promotes education through alarm-something I do not support. Coupling this with grating political instances like Brian Cox declaring "War on Terra" and I simply can't recommend this movie.