The old adage that one should not judge a book by its cover has since been applied to a host of figures-some artistic, some not-and although I generally abide by the suggested morals of English's most popular idioms, I sometimes can't help but infer what I may from the composition of DVD covers. I am only human. Granted, the aesthetic appeal (or, in this case, repel) of a film's packaging does not change the work itself, but does serve as an introduction of sorts in that the design scheme is usually of some relation to the movie's tone, moods, or era. Management's case is telling, and damn telling at that. As Jennifer Aniston stares dead ahead, costar Steve Zahn leans his head on her shoulder, his eyes dreamily drifting towards her gaze; he looks love struck, she looks frightened. And she definitely should. Zahn plays Mike, an outstandingly awkward hotelier who possesses both the adorable ignorance and social tact of an untrained puppy. When businesswoman Sue Claussen (Aniston) spends a brief-yet-memorable stint at his parents' motel, Mike all but humps her leg and soils himself in trying to seduce her. Somehow, by some unexplained miracle, his plan works, though the socially inoperable Mike continues to be ... well ... socially inoperable. What starts as an unabated act of cross-country stalking slowly transforms into a budding relationship-imagine the hypothetical stories they could tell their hypothetical children. Thankfully, not many witnessed this weak effort. Aniston's depreciating star-power and Zahn's relative anonymity were coupled with a small budget and small release, leading to a piddling $933,224 gross on a piddling 212 screens. 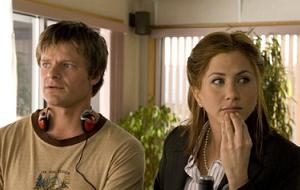 Management doesn't work for me as a film, though its heart is in the right place, or at least in proximity to the right place. The driving idea is social progression, specifically how we must first fulfill our own needs-find happiness within ourselves-before being able to fulfill that of others. Mike is anchored at his parents' place to sustain their business. Sue works a lackluster job and graciously allots her free time for volunteer work. The commonality here is that both put themselves second, though Mike's motives are rooted in family and Sue's in society. This is all well and good, but first time director Stephen Belber portrays their (and others') plights too generically to be affecting. The dialogue of his fluttery script oftentimes drifts off course, reveling in unearned quirkiness and blatant exposition.

In some ways Management's Mike reminds me of Observe and Report lead Ronnie Barnhardt (Seth Rogen), as both characters are culturally narrow and subsequently awkward. However, unlike Jody Hill's work, Belber's formal vision never matches his film's turgid emotiveness. The end result feels as flat as a painting and as warm as a pet rock. Even Woody Harrelson's Jango-who is an ex-punk, ex-boyfriend of Sue's-disappoints. Prototypically safe, he's meant to assure viewers that Mike's misguided affection is less threatening than Jango's volatility, thus making him better suited for Sue. Mike looks like a saint by comparison, which affords Belber the chance to conveniently reform his personality into that of an acceptable romcom lead. Feelgood fans might find something to like here but I found Management to be little more than juvenile ... much like its lead.