Oliver Stone's new cut of his infamous picture Natural Born Killers is 122 minutes of blood-soaked celluloid; a variably styled and affecting look at the now cemented violence of American culture and art. It is a disturbing work, mostly due to its bluntness. At the heart of the film is the contention that over-exposing viewers to wanton cruelty will in turn counteract the influence of the unjustifiably violent media-that, if we see enough shooting, stabbing, battery, and bludgeoning, we'll eventually become self-aware of our de-sensitivity to it, and in turn question future applications of violence. Though ambitious in intent, I find Natural Born Killers treats its subject with too much vitriol to be successful. 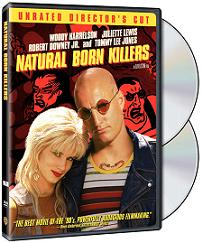 Meet Mickey and Mallory (Woody Harrelson and Juliette Lewis). He a directionless, TV-raised sociopath, she a victim of years of sexual and psychological abuse-they seem perfect for each other. Unfortunately, their shared bliss becomes the plight of society, as the two ransack the Midwest and leave a trail of dead to mark their conquering. Motive? Notoriety and personal indifference. Stone creates these sardonic constructs as a means to an end. Purported to illustrate the ill effects of a violence-saturated media, Mickey and Mallory are largely products of their environment-a unilateral approach to the ol' Nature v. Nurture debate. Still, this conceit-and the conceit that the film is hypocritical in its use of violence to condemn violence-is acknowledged by Stone. Notwithstanding, this plan of attack trivializes the film's commentarial purpose, for Killers ultimately reads as little more than an attack on a straw man society. In other words: the movie never establishes a link between an increasingly violent media and increasingly violent behavior and, because this is merely treated as a given, the picture in no way demonstrates causality and instead guises notions of commonality as such. This practice is deceitful and flattens the picture's scope.

Killers is what I would describe as stylistically busy, though some aesthetic considerations are far from arbitrary. A bombardment of edits, filtration, and overlays keep the viewer at a self-imposed distance from the onscreen violence, as these techniques serve as constant reminders that this is, in fact, just a movie. This tactic also works to viscerally batter the hell out of its audience to the extent where the movie's "point" can't be missed. Naturally, misinterpretations are still going to happen, and some superficially-minded viewers will see this as a championing of violence, rather than a condemnation of it. I get the point, but find Stone's proach unconvincing-the experiential focus only masks flighty rhetoric. Other directors have successfully tested audience tolerance. Jean-Luc Godard made a career of cinematic transgression, though his hypercritical, essayist tendencies always expounded upon what's onscreen. He oftentimes quoted literature and poems in intertitles to, not only punctuate an idea, but to provide that idea with a reflective, artistic context. The contrast of this would be Stone projecting "Too much TV" across Mickey's chest - a flat motif, and one without a hint of self-satire. Contemporary counterpart Michael Haneke also has a history of boasting some rather malevolent imagery, but not without making more exacting points regarding the place of violence in cinema. Quentin Tarantino has done this as well, though usually with tongue firmly planted in cheek. Stone's vision is desolate in terms of association. His broadest concerns - disdain for pop culture violence and those who perpetuate it (take that, Geraldo!)-crumble from a lack of ideological framework. The "reality" of Killers is one of sociopaths, sadistic lawmen, soulless journalists, and not-so-innocent-civilian causalities. Wondering what goes on inside Stone's head seems like a natural response to such a film, but I'll claim bliss in my ignorance. I'd rather imagine his horrors than be further subjected to them.