They say you can't teach an old dog new tricks, and perhaps the same is true for actors as well. This is not to suggest that Sandra Bullock-star of Hollywood's latest potpourri of self-perpetuating cliché-is in anyway dog like, but I can't help but wonder how much longer she'll be playing romantic leads. Though still in phenomenal shape, Bullock is playing right into the hands of our youth obsessed culture and her eschewing of the inevitable comes across as more desperate than empowering. Still, by boasting demographic-straddling star power and requited familiarity, The Proposal turned out to be a box office smash, hauling in $163.5 million from a peak of 3,158 screens. 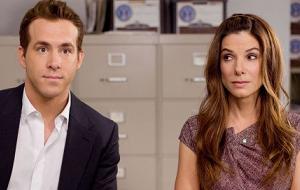 The awkward juxtaposition of Bullock and romantic interest Ryan Reynolds is one of many that the picture revels in. In fact, most of film's jokes follow the formula of passing off awkward pairings as being inherently humorous. They're not, naturally, though I take more issue with the gags' gross lack of ambition. My complaints aside, viewers are privy to the likes of out of shape male dancers, uncouth elderly (poor, poor Betty White), woefully dated duets, and so on. Director Anne Fletcher-who's responsible for such cinematic gems as Step Up and 27 Dresses-approaches these social guffs with minimal concern, as if assuming that comedy will merely birth itself from writer Pete Chiarelli's jejune script.

The plot of The Proposal is as blasé as its jokes, though perhaps slightly less offensive by way of originality. Bullock plays Margaret Tate, a shrewd Canadian import threatened with deportation, who forces lapdog assistant Andrew Paxton (Reynolds) into wedlock so she can obsessively resume responsibilities as a New York editor; her drive the result of a tacked-on parental tragedy. Rather than make any relevant points on Margaret's nature, the film diverges, time and time again, into rote situational comedy. Surely, ideas of capitalist gumption, social precedence, and patriarchal transference are apposite to Margaret's situation, but Fletcher and company prefer to sketch out shoddy family dynamics instead. Opportunity lost.

As a whole the film is hardly abhorrent notwithstanding a few cringe-worthy moments. Around the halfway mark, there's a scene of White and Bullock dancing around a campfire in what's called a celebratory gesture towards nature. Beckoned by White to chant, Bullock goes into a rapt recitation of Lil Jon & the Eastside Boys' transcendental opus "Get Low"-an ironic choice, considering the picture's aim.