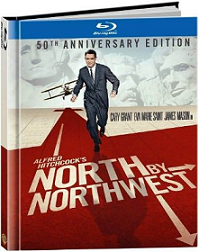 The career of Alfred Hitchcock was as iconic as it was influential and his catalog of sensory-stilted suspense stories would not be complete without the self-aware mystery-cum-comedy North by Northwest. Rather than merely recycling his popularized wrong man motif, Hitchcock lights a match under progressivism and allows his latent ideologies of filmic technique to boil over the surface. The movie becomes a means to express the perceptual completeness of film versus other mediums, namely in how it can send our senses askew; to immerse the viewer in a reality different from their own. Though such a claim seems broad and hardly exclusive to Hitch, North by Northwest is a film that revels in that faux-reality that we call cinema-a work that not only entertains but is fully conscious as to why.

Cary Grant and his trademarked rapier wit coincide perfectly with Hitchcock's formal trends. Both the actor and the craftsman are larger than life and their projection of the fantastic is the driving force behind North by Northwest. The script is trim and penned painstakingly with wit. Grant plays woeful advertising executive Roger O. Thornhill, an outspoken, confident man whose New Yorker schedule leaves little room for leisure. Still, the character is not solely capitalist, for he's depicted as more amiable than your typically cold allegorical constructs. Thornhill is a man wound too tight. Never deviating from his schedule, his attention to detail is borderline obsessive in that he's usually in the utmost control of every situation. This is why the story's jumping off point is so clever in its coincidence-a man who places a premium on communicative clarity is mistaken due to an untimely hand gesture. He falls victim to the chaotic nature of social dynamics and, because in the wrong place at the wrong time, becomes a hapless, helpless pawn in a game outside his control.

Thornhill is assumed as George Kaplin-a believed CIA agent-and is subsequently thrust through a gauntlet of misunderstanding and misrepresentation, all in an attempt to clear his name and identity. His troubles come to extend beyond reputed villain Phillip Vandamn (James Mason) to the United States government after yet another dramatically cinematic mix-up. It is at this point that Hitchcock begins to blur the moral alignment of his characters and valid points on motive-political and personal and cinematic-arise. To understand the reasoning of director Hitchcock is to understand the characterization and ethos of his players.

The world of North by Northwest is a realized one, but a technologically dated one in that such blunders could not exist within contemporary society. Some of the picture's most iconic moments and movements would be irrelevant today if it weren't for the movie's inherent time-capsule quality. Taken within the context of the medium, North by Northwest remains a personal favorite, even if my appreciation for it has diminished a bit over time. It's still template material for magniloquent cinematic styling, especially in terms of taking Hitchcock's classic film language and injecting it with a playful inflection.

This Warner Bros. produced disc does an exceptional job in representing Alfred Hitchcock's vision. A noticeable step up from previous DVD editions, the BD amplifies detail, sharpness, and vibrancy while retooling some saturation to ensure the markedly-50's color palette of the original print. Grain exists in fairly light doses, which helps and hurts. The neat schematics of the New York City streets look crisp and authoritative, though some of the more scenic exterior shots could benefit from an earthier mood. The images are slightly darker as a whole, but not at the expense of brilliant color.

The retooled audio track comes across as stronger-perhaps more emphatic-than previous releases, though not to the point of distraction. Bernard Herrmann's rhythmically frantic score sounds as crisp and threatening as ever.

The casing itself is a bit awkward to handle. In the vain of their Amadeus release, Warners has again infused the pages of the special edition booklet into the spine of the case, creating a book-like box that has not the warmth of a book or the functionality of a case. Pages don't open fully and the design is less than comfortable to wield. It's cute in a display piece way, though isn't substantial enough in size or decor to warrant such attention. Nonetheless, the cover looks smart and the robust BD treatment make this purchase a gimme anyway.