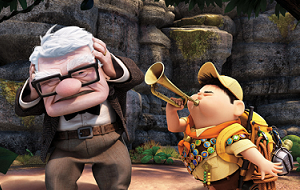 A film drenched in lively sentiment and dreamlike lucidity, Pixar's UP is a departure from the studio's usual anthropomorphic tendencies, instead relying on human concerns to express tribute to cinema and flesh-out, among other things, generational gaps. The now familiar image of protagonist Carl Frederickson's house floating amiably above the world-suspended by the very balloons he made his living by selling-is oddly quaint in its expansiveness. The ornately colored home is merely a dancing blip on an otherwise cloudy blue sky-the juxtaposition of which looks too serene to be called anything but cinema. UP relishes in moments such as this and channels them towards establishing a link between film, past and present. Technologically-based compositions and a pastiche of classic Hollywood storytelling work together to exercise Pixar's point-one that was not lost on audiences. UP went on to gross $292.9 million throughout its domestic run, peaking at 3,832 screens nationwide.

Before Carl's upward voyage, the film introduces us to him as a boy. Sitting in a movie theater, enthralled by what's onscreen-namely Charles "explorer extraordinaire" Muntz- Carl becomes obsessed with the nature of adventure; an obsession that came to be thanks to movies. He lets the cinematic overtake his young life and establishes a meaningful connection with fellow explorer-in-training Ellie, his future wife. The entirety of their relationship is summed up in a montage that makes more than a few allusions to silent-era practices. Though playful and darling, the emotional weight of this silent-film-within-a-film is heavy. Human joy and tragedy is expressed here in ways worthy of Chaplin. Carl's loss of Ellie becomes synonymous with his loss of daring.

Now only able to amble about his abode, Carl closes himself off to the outside world and refuses to give in the pressures of progression. A nameless, expressionless, wordless business man heads a building project that is in need of the widower's house, which now symbolizes the wife he misses and the youth-like innocence the two carried into old age. After being declared a "public nuisance" and forced to surrender his property, the elderly Carl plans his escape. And escape he does.

As Carl's home lifts off the ground-straining wood and snapping pipes-it caroms off a van and heads skyward, smashing a television antenna as it climbs. Though innocuous by design, these "accidents" further the notion of Carl's refusal of the inevitable and act as a theoretical "screw you" to society and TV alike. When he breaches the cloud-lined sky, he is really transcending reality and entering the world of the cinematic. In this, disbelief is asked to be suspended. What follows is a hodgepodge of classic film motif, laudation, and reference that work in harmony to forge UP's fancy-free narrative. Carl and stowaway-cum-sidekick Russell-a preteen Wilderness Explorer of Asian descent-fly to the heart of South America where there's adventure abound. These adventures take on the form of heart-stopping getaways, in flight combat and old fashion villainy. Throughout it all, the duo try to understand each other, just as the film tries to develop an understanding between the technical capabilities of film today and the larger-than-life projections of yesteryear.

Though emotionally and visually potent, UP is not without its issues, some of which come as the result of trying to please adults and children alike. The plot can become tangential and sometimes too silly for its own good-making the aforementioned suspension of disbelief a bit much to ask. Rather than comment on the current state of the medium, UP sets its bearings to Adventure and moves ahead full-bore. What results is an experience only film could duplicate, but the movie seems too enamored in this idea and, in so being, eschews some rather meaty topics. Timely paternal issues arise and are dealt with in well-minded, progressive ways but the film lacks a feminine pulse. While Ellie remains important to Carl's drive, the female impact is primarily gauged through remembrance and symbolism and not actual involvement. Side characters are playful-namely a talking retriever named Dug-but not particularly memorable; which is odd, as secondary players are a strength in most Pixar offerings. Nonetheless, UP is another gem in the studio's crown and one of the better offerings from this year. The levels on which it can be enjoyed-poignant, experiential, intellectual-elevate UP above most examples of contemporary cinema and even some of its own beloved classics.

The aesthetic of the film is something new to Pixar and lies somewhere between the earthy warmth of Ratatouille and the contrasting vibrancy of WALL-E. Having had the pleasure of seeing it in theaters, I can say that Disney's Blu-ray treatment of UP not only aptly represents the vision of co-directors Pete Docter and Bob Peterson, but also the capabilities of BD technology. The image is uniformly bright and the high-def transfer brings out the ever-expressive details of Carl and company. Backgrounds are well-textured and offer a great sense of space, which is as apparent on home theaters as it is on commercial ones. As per the Pixar norm, humans are given more skewed features than the surroundings they occupy, but without sacrificing a crisp relation between character and environment. Michael Giacchino's bubbly score and other audio considerations are well-represented, though not as emphatically as I expected. Nuances in sound are delicate and dreamy, as if to match the film's nostalgic essence. Disney has put out a product that matches the high-standards of the film itself; the Blu-ray treatment is as definitive as possible and marks cinema as something to behold.