I'm at a bit of a loss in writing about Wim Wenders' Wings of Desire-a work worthy of words more beautiful than my own-in that German-born Wenders has crafted a film so ethereal in its essence that I run the risk of trivializing its allurement by pattering on with weighty hokum and verbose verbal flowering. This is a film delicate in its self-assurance. As a piece of art, Wings of Desire is remarkable in its grace, for the camera comes off as little more than an airy presence-one that references the beauty of existence through some rather dreamy compositions. Gliding along as if an apparition, the lens tells of a dynamic between the physical and the celestial; its imagery a testament to the contrasting existences we define ourselves by. 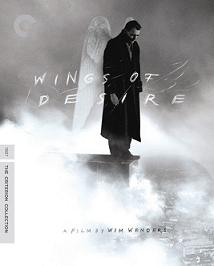 The world of Wings of Desire is one of angels. These heavenly beings walk among people and listen in on their most personal (and interpersonal) musings-fears, desires, moral obligations-stopping periodically to console those in need. The angels' purpose is to impart a recollection of human warmth where it's needed. In this, Wenders' film takes on the challenge of postulating a culture of angels, specifically how they perceive the world in contrast to mankind, and how this sensationalist gap defines their own moral sensitivities.

The film is bookended by the journal scribbling of angel Damiel (Bruno Ganz) who, along with other divine protectors (namely Otto Sander's Cassiel), watch over the streets of Berlin. Their abilities are not of a physical nature, but a spiritual one. Rather than be confrontational in their approach to man, the angels project a sort of binding warmth that gives way to cognitive guidance-suggesting that happiness may come from within, but the capacity for happiness is dependent upon outside sources. In this, ideas of being independently happy are adjourned from Wenders' vision. The moral fulcrum of the film is based around this notion and that - as the angels continuously adapt to meet the psychological needs of humanity-they, though immaculate, become conscious of human emotion and longing. By observing the pleasures of mankind, particularly how they revel in the sensory, Damiel begins to ponder the tiny miracles that make up day-to-day life. He contemplates the advantages of experiencing things over knowing them and becomes fascinated with daily minutia like smoking, recognizing color, and the potential for taste. Naturally, this leads to an internal conflict in Damiel, who wants to exist outside the finite confines of Knowledge-to cross from the metaphysical to the physical.

Though Wings of Desire makes hypothetical-yet-relevant points about cultural assimilation and blissful ignorance, it double-functions as a pictorial of the city of Berlin. After living in America for eight years, Wenders returned to his Germany and found himself a social spectator; the making of Wings was, to him, about reestablishing himself amongst his own while expounding on the phenomena of perspective. The work paints earthly pleasures as transcendent, even in the eyes of divine certainty, while detailing the nuances of urban dwelling. Its focus on environment and how surrounding shapes self-doubt is edifying, if not wholly realized. Even the flourishes of music that denote differences in heavenly and earthly presences are pleasing in their concern. The poetic monologues of writer Peter Handke add hints of jocularity to the movie's overarching sense of spiritual reflexivity. Wenders exceeds in channeling these formal components and translating them into a singularity that's symphonic in its harmony. All these elements-the coexisting dimensions of man and spirit, the technical articulations, the weight given to life-come together under his helm to become cinema in its purest sense; a personal expression capable of moving countless others; a masterwork.

This two-disc Criterion release, while not chock-full of extras, does well in aiming its concern at the movie's strengths. First and foremost, the result of a new high-definition restoration is sublime. Upconverted, the film is sumptuous in aesthetic, though some fans may take issue with its sepia washing being excluded. That said, the stark black and white of the astral world is still breathtaking, and not to be dismissed outright.

A handful of excerpts and the like adorn the second disc, most of which deal with how Wenders and company (most notably cinematographer Henri Alekan) approach capturing a picture's tone and mood. The Angels are Among Us is a short documentary regarding the film's development, especially in terms of theme and technique. Wenders is forthright with his feelings about this and other works, and the relationship between him and ubercraftsman Alekan is showcased as one of respect, honor and humility. The pair pal around and discuss the physical labors of something that ultimately feels preternatural. Detail is at the forefront of these features and featurettes, illuminating viewers to the rigors of composing shots, structuring a story, and emulating light sources. Though this may sound like little more than tedium, I find these technical separations between artist and end product important, if only to show the organic nature of the cinematic process. This one comes highly recommended.