A quaintly served slice of self-discovery, Julie & Julia won audiences over with the inherent warmth of its story and the presence of its actors. Opening in the midst of blockbuster season, Nora Ephron's latest effort provided a healthy alternative to those not smitten by bangs and booms. In this, the film went on to perform well, garnering $94.1 million on from a peak of 2,528 locations. 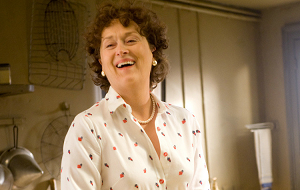 The film's title refers to its main characters: Julie Powell (Amy Adams) and Julia Child (Meryl Streep). Despite the differences between the two-Powell live in a post 9/11 world, Child resides amongst Parisians in luxury some fifty years prior-the two become spiritually united, if you will, by their love of food. The movie shares both of their stories, rhymed against each other, as a means to draw parallels between various cultural and generational conditions. Though its emotional arcs are familiar and its cognitive concerns fleeting, J&J exudes a kind of delicacy and thoughtfulness that makes it hard to dislike.

Taken from the written accounts of both Powell and Child, Ephron's screenplay allows for a unique, somewhat autobiographical retelling of the subjects' stories. The narrative is comprised of scenes from the lives of the women as they discovered cooking and, accordingly, themselves. To evoke these concerns, Ephron first applies a primer of feminist concern - specifically, showcasing the silly conceits to which gender bias exists-and slowly brushes on light strokes of purpose, both socially and introspectively. Also emphasized are the ever-progressive trends in science and currency, which hints that, no matter how times change, our basic needs of human intimacy and self-fulfillment will always remain. Both characters eventually find their driving force-to love and to be loved. Save the reserved aesthetic and air-balled chance to say something interesting about the creative process-which brought out a spark in both leads-I enjoyed this film. At the very least, it's very agreeable.