Road movies are tired by concept, especially when executed with the steadfast banality of something like writer/director Michael Meredith's The Open Road. Meredith's sophomore effort is slight and predictable-a film directed by rote and acted without feeling. Though its message isn't entirely devoid of worth, The Open Road relies on the same neatly packaged metaphors of its predecessors, doing little to develop its pending themes of social accruement and priority. Rather than inject originality into his script, Meredith models this tale of prodigal-father-meets-discombobulated-son as a generic fable of self-discovery. By burying the personalities of leads Justin Timberlake and Jeff Bridges, The Open Road is left with nothing-save the always likable Harry Dean Stanton-that elevates it above its own melodramatic hokum. Not surprisingly, it spent just a week in theaters and grossed a mere $19,348 on seven screens. 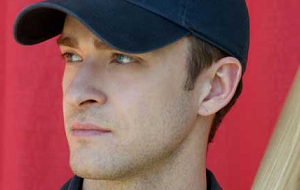 Timberlake plays Carlton Garret, a slumping minor leaguer who's feeling increasingly betrayed by his life's direction. As the film opens, his career reads as little more than a poor imitation of his father's, that is, "baseball great" Kyle Garret (Bridges). Where his father excelled-namely on the diamond-Carlton falters. Still, the film looks not to make points about the lapse in ability between father and son, but the differences in their social anchors and life aspirations. Carlton is introspective and is slowly coming to terms with the young man that he's growing into, one that runs in relatively small circles and would rather do something expressive (like writing) than hollow (like sports, apparently). He cares for his ailing mother Katherine-played awkwardly by Mary Steenburgen-and acts overtly tense around his ex-girlfriend Lucy (Kate Mara). Katherine's illness acts as a narrative catalyst, for she requests, nay, demands that Carlton track down his father before she undergoes surgery. The severity of her condition seems to vary from conversation to conversation, making the film's emotional weight unfairly distant.

Finding Kyle is not much of a problem, despite his declination of now standard technologies like cell phones and web access. Kyle is old-fashion by design and the success he procured from playing ball permits him to live out his narcissistic, hedonistic dream life with little cause for pause. He claims he loves his son and ex-wife, but not as much as himself; his reproach is evident in the lengths he goes to in avoiding Katherine's request. After "misplacing" his wallet-which contained his ID and prevents him from flying ipso facto-Kyle, Carlton, and Lucy plan on driving from Ohio to Texas, which strains their every relationship in what is ultimately a closed-off cinematic world. Carlton bemoans letting Lucy go and angers at his father's shenanigans. Lucy can't get over her current boyfriend's insensitivity or Carlton's sexual obliviousness. Kyle just wants to party despite Katherine's condition. This dynamic sets the tone for a film rife with doublespeak, bathos and trivialization. Autobiographical notions exist, but are flimsy and used more as a narrative ploy than anything of thematic interest. The son of football legend Don Meredith, Michael Meredith's film comes off as an attempt to qualify his own creative aspirations, rather than to say anything noteworthy about the artistic process. The movie is, in its entirety, a guised meditation on personal development - one that fails to adequately develop its characters to the point of being affecting.