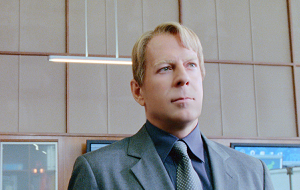 After a promising enough start, one that adequately addresses expository matters and demonstrates appreciable concern for technological and cultural progression, Surrogates soon diverges into a succession of hackneyed action sequences (read: chases), which, in turn, eschew the many existential possibilities that its premise affords as the film instead focuses tirelessly on winning over audiences with little more than banal visceral motifs. Not surprisingly, the movie wasn't pre-screened for critics. In this, Surrogates still garnered modest attention thanks to its subversively dystopian flare and, moreover, leading man Bruce Willis. It banked a front-loaded $38.5 million during its US theatrical run, but fared better on the international stage.

In the not-so-distant future-a world that looks all too much like ours today-robotic stand-ins (AKA surrogates) live out the day-to-day lives of their human operators, who safely control their surrogates from home. Though originally intended for medical and military use, the numerous practical applications of this biotechnological breakthrough eventually led to widespread consumerism-soon after its approval, 98% of the world began incorporating surrogates into their daily lives. In this, communicable diseases and crime all but vanquish, as does racism and sexism withstanding any logical explanation. (The implication that these -isms are purely human constructs feels more than a little cheap, as human nature would still prevail, no?). With these claims in mind, surrogacy is advertised as "Like life, but better," though the impetuous shift to such life-redefining technology isn't bought by all. Small communes of Dreads-humans who live free of surrogate influence-exist throughout the country. Their makeshift municipalities are characterized by squalor and intolerance; their rights constantly impeded upon. The whole situation is akin to humanity turning a deaf ear to the very thing that marks its transcendence: a consciously experiential life.

Though the conceit of surrogacy bears some interesting notions regarding progress and humanity, the end result is half-baked. Wiping out communicable disease hardly seems sufficient in justifying the gross increase in sedentary lifestyles that would result from users spending days at a time occupying their surrogates (and the gross increase in heart disease that is sure to follow). "No more going to the gym!" a surrogate commercial boasts, obviously hinting at American superficiality, while ignoring all other factors. This is the problem with Surrogates: it assumes too much. With philosophical implications that are lowbrow at best, the picture revels in contrived logic and annoying twists to fill the void left by director Jonathan Mostow's lack of care. Realistically, the film could work as an allegory for our dependence on technology and the way we guise ourselves with internet-granted anonymity. However, the movie really has nothing to say about this relationship, save that one never knows who they're talking to online. Other commentaries about the shortcomings of digital dependence exist-which include perpetual surveillance, identity theft, and social distancing-but in light, irrelevant strokes that act in service of the action, not vice versa. Worse, issues of humanity are forced-life as we know it is drafted as empathetic rather than wondrous. Mostow's picture is so busy painting mankind as egotistical-yet-likably-pathetic that it even confuses unintentional comedy as drama. A scene where we see society literally come to a halt as every working surrogate simultaneously shuts down fails to feel liberating or affecting and instead just reads as silly. Like the titular constructs, Surrogates is merely a front devoid of life and passion.

Casting aside my complaints about the movie, this Blu-ray from Touchstone is adequate, and exhibits sound and picture quality beyond the capabilities of SD. Visually, Surrogates is a unique film, though, in this instance, such a descriptor is neither a negative or positive. Omnipresent is an unmistakable, chilling hue that adds to the air of futuristic sterility in the now robocentric society. That said, colors can sometimes feel matted, particularly when Mostow tries to pass off existing buildings as ultramodern architectural via digital adjustment. Not only does such a motif feel lazy from a cinematic standpoint, but it hardly translates as immersive from a visual one. Aside from this minor quip, the image's grain structure is well represented and allocates dimension fairly well. At times it looks inconsistent, becoming too smooth or awkwardly noisy, though this may be a play on the film's man/robot duality. If anything, the release's 5.1 DTS-HD audio track is more impressive, as it runs the gamut of possible peripheral noises and action effects, all of which are delivered with a crisp, exacting finish. I would say the overall representation here is above average, though not so much that I would even consider recommending the BD to those who haven't seen the film.