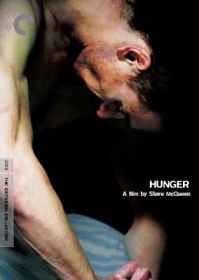 Drawing from his background as a painter and photographer, first time director Steve McQueen exacts a remarkably mature grasp of composition and, more over, the roots of social conscience in his debut feature, Hunger. McQueen's film deals with the 1981 Irish hunger strike-an act of political protest that meant the lives of 10 Irish republican prisoners. By placing an emphasis on the erosive nature of time and adaptive-cum-perfunctory rituals of respective lives, Hunger is a perceptive piece, one that details the pain of all involved in its particular chapter of The Troubles. Just as prison guard Raymond Lohan (Stuart Graham) soaks his knuckles in warm water and screens his car for bombs, so too does prisoner Bobby Sands (Michael Fassbender) funnel his piss into hallways and smear his cell walls with feces. Still, McQueen's exercise isn't in paralleling authoritarian rule and the squalor (both literal and metaphorical) that results, but in the chasms that exist due to cultural divergence.

Indicative of his already refined form, McQueen subtly works in a personal communiqué on the preciousness of human life and does so without trivializing grander themes of self-sacrificial resolve. In this, his deliberately paced, reverently observant film doesn't play favorites-granted, the collective voice of the IRA-affiliated is resoundingly empathetic-and instead works at exposing the most abject aftereffects of political adamancy. In other words, the real-life sufferings of striker and guard alike evoke the feeling of tragedy on levels of both personal (the eternally relatable loss of human life) and cultural (a regression to barbaric tendency) relevance.

Despite being a fan of McQueen's presentation, the force that is Fassbender is not one to be ignored. Rather than evoke the personality of the fallen IRA figurehead-who was elected to the United Kingdom Parliament during the strike-via blasé impressions or caricatural embellishment, the rising young star instead recalls his memory by embodying Sands' most celebrated trait: his conviction. The best example of this comes in the form of a 16.5 minute static shot that subverts Hunger's previous dependence on moments of wanton degradation. During this scene, Sands converses with prison priest Dominic Moran (Liam Cunningham) about the moral implications of the imminent hunger strike. The two actors play wonderfully off each other, deftly voicing their own inexorably cultured stances and hinting at the unavoidable faux-Christ tropes that such a story affords. Still, the overresoluteness that Fassbender exudes does more than reduce the piece to a fabling tale of martyrdom. And with the selfish-versus-selfless ambiguity he injects into Sand's motives, Fassbender adds an ironic slant to the Christ parallel, breading more room for discussion and, naturally, enjoyment.