Being principally budgeted in Europe, it should come as no surprise that The Duchess hardly made waves stateside, at least fiscal ones. Managing a paltry total of $13.8 million on our side of the pond, producers, at the very least, can take solace in its overseas success. They also can and should be comforted in knowing they backed a good film. 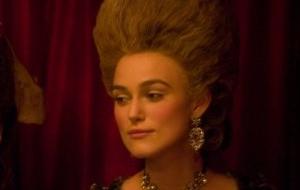 As of late it seems Keira Knightley has monopolized the leading roles in costume dramas and period pieces, a trend that may bring speculations concerning her range. While it is apparent that, in acting, she favors era swapping it is hardly a just criticism considering the projects she's partaken in (excluding the dreadful Pirates of the Caribbean series). While their lavish décors provide aesthetic opulence, many equally important ideas wade just below the surface. Notions of genders being transcribed as classes, of expressionism, and of conversational lulls in society are all pertinent to their success as motion pictures. The Duchess is no exception.

Director Saul Dibb may not be presently thought of as an accomplished artist or even craftsman but his poise shows promise. DP Gyula Pados captures Dibb's lusty, colorful vision well, though many shots do seem generic. That being said, I find that the familiar superficial fare counters the film's themes rather well. By not being stylish to the point of distraction Dibb freely allows his characters to ruminate on the social expectations that have befallen them. Instead of addressing these ideas as internal battles he spotlights the title character, Duchess Georgiana (Knightley), and uses her public grace to provide commentary. The inception of her marriage to the Duke of Devonshire (Ralph Fiennes) makes her social purpose-birthing an heir-clear. The freedom to live expressively, which she cherished as a youth, has been replaced with silent dinners and mechanical lovemaking. Their manor, ornate in its delicacy, only widens the marital void, creating an additional unwelcome barrier between them. Due to these observations I began pondering whether or not the rigid social system or the people that uphold it are responsible for such formal awkwardness. Neither option is a suitable answer.

I am always weary when the opening of a film is insistent on stating its based on a true story as it is usually rather arbitrary to the picture's message. With The Duchess, Dibb aspires to illustrate feminist concerns and any overlap they may have in modern society. To elaborate, it does not take Georgiana long to realize how banal her life and marriage are and for her to respond accordingly. After an allusion to men being free to express themselves and women only showing creativity through dress, she quickly elevates her social standing to parallel our own fashion icons. Aware of her ability to draw attention, she becomes actively involved in politics and is soon more beloved than the Duke himself. She is constantly in the public eye and so is her opinion. This yearning for attention, to please others, actually embodies a main conveyance of the film: dreamers vs. realists.

Georgiana is a victim of her time. Instead of accepting this, she acts, and these actions greatly transform the rather humdrum setting into something mysteriously atmospheric. The film flourishes because she strove to be more than a birthing prop and because Dibb understood the potential this story had. Kudos all around.

Such a historically and, therefore, artistically rich time period plays well into the hands of this new format. Lush greens populate the screen early on and the detail and coloring, particularly in the outdoor scenes, look exquisite. Worth mentioning is the way Gyula Pados experimented with focus and how well it translates here. Because of the great care given to rendering close-up and medium shots, the foreground figures look beautiful and crisp while the background appears uniformly blurry. While some may see this as a complaint, I am certain this play on depth was intentional, especially given that Knightley usually appears in focus. I am also clued into the purported effect due to how incredible the focal depth is in other shots, namely the interiors. It could be said that the image is a bit bright because it sometimes adds a tinge of white to the lead's hair or never showcases deep blacks, though such complaints are mere quibbles.

All in all, Paramount has done an apt job of demonstrating the attention they put into their BD releases. The picture is crisp and displays the regal detailing of manors' corridors, furniture, and paintings impressively well. The efforts put forth here serve the movie greatly.