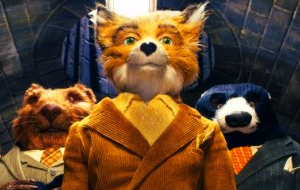 "Does anyone even read my column?" laments Mr. Fox (George Clooney)-a chicken poacher-cum-journalist who was forced to shed is illegitimate-yet-instinctual career path as a promise to his pregnant wife (Meryl Streep). Naturally, I can associate with, as his friends call him, Foxxy and his need for professional validation but, moreover, I find his existential crisis all the more fascinating, as idiosyncratic auteur Wes Anderson (Rushmore, The Royal Tenenbaums) uses his protagonist's animal upbringing as a way to explore the effects of civility on the psyche. In other words, Fox and his Family are analogous to a standard nuclear one, and Anderson posits that human tendency-namely our ability to manipulate our surroundings due to our refined sense of physicality - doesn't fall far from the animality of our ancestors. Still, this parallel of man-to-animal carnality isn't meant to criticize our species (though I'm sure most moralists will spout otherwise). Rather, Anderson deploys this trope as a way to explain the relative erraticism of our personalities in dealing with issues that threaten our comfort-be it social, professional, or familial. The work is not meant to be an ipso facto proof of our having bestial bearings, but instead an examination of our natural currents and the difficulty in breaking free from these most inherent of habits. As such, Foxxy lies to his wife about returning to his life of crime-only labeled as such because of the danger involved and what losing the patriarch would mean to his family, not because foxes view stealing as wrong-and chalks up his behavior to his being, "A wild animal." And while the film certainly doesn't advocate a reversion of civilization, it does exhibit how norms and mores are formed out of both necessity and custom; that we behave in certain ways and develop certain rules out of the best interest of our species, thus relegating the individual to a life of insignificance. Foxxy, charming in his quizzicality, struggles in coming to terms with this lot, for he feels all but oppressed by the bonds of society-one that he recognizes as mandatory, but feels he should, in some ways, be exempt from. Unfortunately, audiences didn't seem ready for this wondrously realized take on humanity-which also features heavy doses of Anderson's typically stagey postmodern semiotics-and the picture only went on to gross just under $21 million. Hopefully, the exemplary Blu-ray transfer and the cultish tendencies of the director's fan base will bring it more luck on the home market.

With his first feature-length foray into animation, Anderson delightfully employs the sub-medium of stop-motion to convey the textural artifice of his woodland world and, thankfully, this 20th Century Fox (how appropriate, no?) transfer nails the detail and depth that such a film affords. Even with an incredibly light grain structure the image maintains some incredible allocations of spatial priority, as opposed to the mostly-flattened frames of his prior pictures, and visual minutia is also showcase quality. The autumnal tonality of Anderson's obviously nostalgic aesthetic reads as a pure representation of the director's intentions and, moreover, enhances the film's already immersive nature by glazing the imagery with an overwhelming air of recurrent roguishness. Say what you will about the film, which is sure to divide some, but the Blu-ray representation is nothing short of fantastic, even perfect.