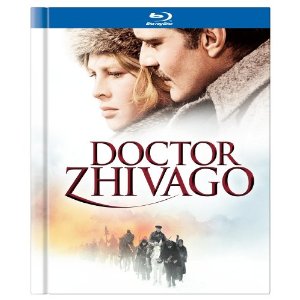 With a sweeping trajectory and natural emphasis – I mean “natural” in the way flora and fauna abound the film’s frames and not as a descriptor for the acting or dialogue, as these feel somewhat stagy, histrionic – David Lean’s Doctor Zhivago is, above all else, an appraisal of humanist concerns; one that seeks to expound on how individualist actions (and ideologies) affect society at large and, subsequently, how social impositions strip away the person-to-person uniqueness of the human experience.  The film, based on the novel by Boris Pasternak, uses the raucous period of Russia that spanned from 1912-1921 as a way to show the fragility of life’s intangibles, be it civilization or the psyche.  Much like another 1960’s Lean epic, Lawrence of Arabia, Zhivago is told via flashback and is largely a reflective account of one man’s life.  But whereas the characterization of T.E. Lawrence (Peter O’Toole) was heightened by such recollections, using them to play up the mystique surrounding Lawrence’s accomplishments, the narrative of Zhivago and, moreover, the depiction of its protagonist Yuri Zhivago (Omar Sharif) seem too far removed from this ploy of formal intermittence for it to work in any relevant way.  Of course, there are still other issues at foot – who is telling the story, to whom the story is being told, and what implications can be drawn from this motif of meta-narration.

At the picture’s opening Zhivago has already been dead for some time.  Rehashing the late doctor’s life is his half-brother Yevgraf (Alec Guinness), whose prose is as decorative as the uniform he wears, which, is to say, not very.  Yevgraf is searching for the daughter of Zhivago and his lover Lara (Julie Christie) and spends the greater portion of the picture – aside from the bookending “present day” scenes – teaching his could-be niece, known as Tonya, of her lineage – his aim is to instill identity in the orphaned child, as life has afforded her no sense of selfdom.  Accordingly, this sentiment is also one held dear by Zhivago himself as evident by the expressively subversive poetry he so often writes.  An enemy to the Bolshevik party via his individualistic ideologies – which is in stark contrast to the Reds who’ve denounced the personal life in Russia, calling it “dead” even – his work still garners acclaim in the way his content, and the tonality with which it’s presented, is derivative of life at the time; how the country’s reversion to a collective emphasis irreparably damages the way its citizens orient themselves to life and its many ambiguities.  To some extent, this is where Lean goes awry or, at the very least, fails to deliver a picture as robust as such context allows.  Zhivago’s genius is given an almost transient quality (he’s shown mostly as a survivalist), for the film never fleshes out his inspirations or weighs the importance of art in such times of tumult.  Instead, it’s Lean’s proclivities of scale and staging that take precedent, making the picture a practical marvel that’s devoid of any groundbreaking implications about personal regression in the face of political change.  To be sure, the work functions well as a showy, yet mostly tasteful, approximation of social change and the latent costs that come therein, but it encapsulates this in a world that’s more operatic than affecting.  The end result is indeed an achievement, just not a very inspired one.

Warner Bros. has outdone themselves with this release, which rivals, if not surpasses, the rather resplendent resolution of their North by Northwest Blu-ray that landed on shelves some six months prior.  Colors are vibrant, reds especially so, and contrast levels feel appropriately honed as to afford a feel consistent with the film’s warm humanist perspective (Siberia-set scenes notwithstanding).  Blacks and other deep hues offer up a rich, textured look that so eschew normal BD pitfalls like glossiness or spatial compression.  Instead, the movie’s imagery iconic, as shot by DP Freddie Young, looks understatedly deep, softly natural, and, above all, feasibly realistic even 45-years later.  If I had one complaint in terms of the picture’s palette, it would be that reds, at times, can be a bit overpowering, though this could be chalked up to what the color represents in the film – an ominous marker of violent change.  Due to the length of the work (197 minutes), it’s likely that this final print was derived from many source prints, which would account for the slight inconsistencies in grain structure and noise.  Nonetheless, these qualms are minuscule, especially in comparison to how wondrous the rest of the representation is.

Aside from its sumptuous visual representation, audiophile will also take note of the relative subtlety of the master audio track.  Maurice Jarre's ever-evocative score can billow like the smokestacks in old Moscow, sure, but it also can give way to some astutely designed audial minutia.  Sounds of both diegetic and non-diegetic origins to the proper speakers in order to substantiate the images already immersive quality.  Effects sound more organic than they do crisp, which ties in well with the picture's overall air of stilted ordinariness.