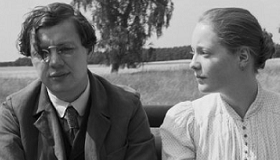 Oh, that Haneke. Ever emanating a kind of elastic ambiguity – in the sense that his tendencies of including brief bouts of brutality and matter-of-course mysteries usually fall within a finite spectrum of oppressor/oppressed dialogues stemming from the relationships of characters’ between, not only each other, but also Haneke as some form of directorial deity – the Austrian auteur has never been one to eschew the enigmatic in his approach to cinema.  But in the case of The White Ribbon, Haneke doesn’t merely flail his omnipotent arm at an audience that he assumes, and perhaps rightfully so, demands observationally granted omniscience as it pertains to the actions and motives of his principles.  (This isn’t to say that his other films are strictly, or even overtly, exercises in contempt of his own crowds but, that in this case, he extends the olive branch in the way he weaves a work of more humanist uncertainty than he has in pictures prior).  By allowing mankind’s esotericism to define, at least on a social scale, his rural, pre-World War One setting, Haneke presents us with a resonant realization of life and its inherently elusive intricacies.  The result of this restraint, if it can so be called, was enough to win the movie Cannes' coveted Palme d'Or and afford it a small run in American movie houses.  Seeing how it reached a peak of merely 106 screens – grossing $2.2 million in the process – The White Ribbon will likely fare well on home-viewing formats, as they afford the geographically unfortunate (purely in relation to screening locations) a chance to undertake what is, in my mind, the director’s finest accomplishment.

Perhaps surprising is the film’s almost immediate inclusion of voiceover narration, as this concedes both a perspectivist cognizance and, more importantly, the gap in individual knowledge that’s congenital to such a motif.  The latter issue, as if not a given, is even granted to us by the narrator himself.  Contending that some of the story is indeed based on hearsay (and presumably presumption), our storyteller – a now elderly tailor who, when younger, was the schoolteacher of Haneke’s fictitious village Eichwald – begins recalling the time he spent in his hamlet of old.  At this point, questions should arise as to how literally we’re to take his account, particularly as it pertains to incidents to which he’s not privy.  And this isn’t to suggest that we as viewers should question the School Teacher’s (Christian Friedel) moral fortitude (though I suppose we technically could), but that we should be aware of how his personal perspective is not one of great efficacy and details will assuredly be obscured.  As such, The White Ribbon, despite its meta admissions, should be viewed as a parabolist encapsulation of Germany’s pre-war era: a simpler time when it was possible, perhaps probable, for a village to be ruled by a trinity of authoritarian elite.  Between the Doctor (Rainer Bock), the Pastor (Burghart Klaußner), and the Baron (Ulrich Tukur), Haneke espouses his picture as one of class advantage, their origins, and how such social contortions can lead to equally unjustified feelings of supremacy and inferiority.

At the onset of the film, the village appears emblematic of its era and the black and white aesthetic envelopes the work, including the horrors to come, in a kind of quaint ambiance – stillness giving rise, or sheltering delicately, human cruelty within a beautiful, crystalline enclosure.  However, it’s not long before this idyllic illustration begins showing shades of imperfection.  Anonymous acts of violence and sabotage begin rearing their head in Eichwald and it seems that with each deed done retaliatory reactions follow.  And it’s the fissioning of this violence, the way it’s presumably perpetrated by other individuals, done so to increasingly disturbing depths, and is splitting incessant into other circles – while the malevolent and their motives dwell mysterial – that evoke a wholly realized depiction of the way, like altruism, enmity too carries a certain reciprocity.  Sure, I could prattle on about how the film abounds in symbolism, and how Haneke uses it to show despotic hypocrisy as the virus affecting human progress (the titular symbol of purity notwithstanding), but how he evinces the exploitation of a moral Zeitgeist, namely by those with the capacity to beguile it, is perhaps his greatest achievement here.  The message seems to be that, in both cinema and society, we must abandon the dogmatic tenets that so hinder headway, even if that means seeing life with more iniquity than we believed there to be.  A sobering reflection, to be sure, but one through which, eventually, harmony may ring.