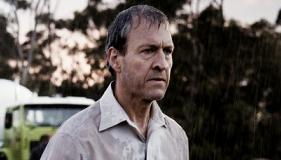 Sedentary characters don't make for good protagonists in thrillers, which is probably why The Square comes off more as a slow-paced drama where, inevitably, stolen money, affairs, and blackmail are all put to bed with waved guns and bleak outlooks.

Handsome Ray Yale is a foreman overseeing the construction of a honeymooner's getaway, the sort of place where, as his boss tells him, needs less glitz and, really, just "good beds to fuck on." Ray, with his silvered hair, starched shirts, and gentle scowl has been cheating on his wife with Carla, a local hairdresser whose white trash husband just so happens to have stashed a large amount of dirty cash in the ceiling tiles. The two scheme to take the money and run, but a landslide of unfortunate events is triggered, and poor Ray realizes that maybe he shouldn't have started making decisions after all.

The script's biggest downfall is its portrayal of Ray and his sheer lack of obvious desires or fear. His options are readily available, but it's never clear what he actually wants. Ray, in the midst of being faced with physical harm by a blackmailer, and being found out as at the very least a philanderer, continues to arrive daily at his construction trailer, hunching over his desk, scowling, and dragging his feet in covering up a murder. He could easily get the hell out of dodge at any time - Hell, the movie opens with a literal "high road" leading out of town! - yet for some reason Ray just waits around for another bad circumstance to fall in to his lap. Perhaps that's the film's point, to make decisions whether good or bad, then deal with the consequences. Nonetheless it makes for maddening viewing.

Equally maddening is the cast of town roughs, all portrayed with facial hair, mullets, or both, and in direct opposition to Ray's middle-aged silver fox. Carla's husband Greg, a tow truck driver (irony - he pulls people out of trouble!), is a necessary conduit to the script, yet is so by-the-numbers it's embarrassing: stocky angry bloke with out-of-date haircut and a pitbull? Really, how in the name of God did a put-together hair stylist end up with a guy who looks like a Night Ranger fan? It's a disingenuous relationship, and seeing as how the script has no issue doling out happenstance, could at least lean on a one-liner from Carla, such as, "what happened to you, Greg? You used to bring me flowers."

By the end of the movie so much steam has been lost that the script goes where it has to go. Numerous townies get angry and thrust guns in peoples faces. A symbolic sub-plot involving Greg's pitbull and Ray's poodle comes and goes without logically tying in to the film whatsoever. Characters long forgotten about are brought back for mere minutes to help tie loose ends, and Ray wanders in to and out of a few more bad scenarios until we're left simply with the image of yet another road, this time not so high, trod by a lone traveler.