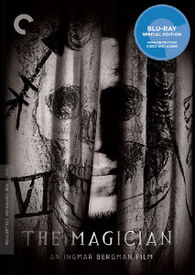 It’s a common and perhaps justifiably-perpetuated fallacy that the thematic core of Ingmar Bergman’s The Magician revolves solely around actors and evocation – a belief made boiler plate from the kind of by rote analyses that result from the interpersonal dependence of up-and-coming critics.  And, to further reflect upon this misconception, that theme – of performers and their guises – is indeed a quiddity of the famed Swede’s work, being ostensibly evident in everything from the acting troupe in The Seventh Seal to the powerful provocateurs of The Rite and, of course, the family Ekdahl of Fanny and Alexander.  That aside, I feel that the essence of this particular picture is more complex than what that explanation accords, as The Magician seems most enamored by the nexus of artist and audience in the way it emphasizes susceptibility and emotional manipulation.  The film still abounds in implications about acting, to be sure, but in manner that’s more vested in social schemes than it is artisanship – Bergman explores why one person may be prone to piousness and why others instead bid to bed beauties (and runs the gamut between these moral poles) by having his characters evolve out of their own culturally-derived, catalytic vulnerabilities.

As the Volger Magnetic Health Theater – a band of charlatans most notably comprised of titular illusionist Albert Vogler (Max von Sydow), the anomalously masculine Mr. Alman (Ingrid Thulin) and self-labeled sorceress Granny Volger (Naima Wifstrand) – arrive into town they are immediately accosted by a trio of local elite who demand to sample a smattering of their act.  It appears that, in the wake of some preceding presentations, the Volger troupe have carried with them an air of infamy due to the riotous reactions of their antecedent assemblages.  In this, the three men, who form an all-but omnipotent trilogy of wealth, power, and academia, demand to bear witness to the performers’ supposedly supernatural gimmickry in order to “once and for all” settle the debate between scientific objectivity and quasi-religious mysticism.  And it’s through this inquisition of ideologies that Bergman explores the finer facets of his film by demonstrating a cultural cause-and-effect between social location and suggestibility, not by showing a correlation betwixt education and naivety but by demonstrating the impact that one’s environment has on their personal evolvement.  Whereas the servants proved receptive to the group’s charms, purchasing potions and swallowing stories, the more science-minded remained instilled with incredulousness, and rightfully so.

Of course, this scenario also allows for implications about the existence of a higher entity to arise.  Bergman often dealt in such matters – which are especially explicit in his 1960’s works Through a Glass Darkly, Winter Light and The Silence – though here is where we begin see him erring on the side of skepticism by positing those more faithfully inclined as most effusively fragile.  Ottilia Egerman (Gertrud Fridh), the wife of a consul, is particularly symptomatic of this mindset.  Having recently lost a child, Mrs. Egerman throws herself at the mercy of the magician, for she’s convinced god has sent him to alleviate her lament.  However, despite dutifully developing an organic sense of inter-character chemistry, The Magician ultimately regresses intellectually by turning Vogler’s final illusion into Bergman’s own take on the “no atheists in foxholes” idiom, as his head-rationalist, Dr. Vergerus (Gunnar Björnstrand), ends up, due to what’s more akin to cinematic invention than realistic trickery, forsaking his fearlessness of the phantasmal.  But by not grounding the doctor’s distress within the same practical context of the rest of the film, Bergman trivializes both bifurcations of his message:  that incertitude is inherent to humanity and that art can overwhelm anyone.  Sure, the movie is still considerate of many things, such as the interactive nuances that expose us emotionally, but the built-in bias of his finale ends up cheaply diluting his otherwise ambiguous stance on the coexistence of art and objective reason.

Gunnar Fischer's cinematography looks transcendently sharp and consummately contrasted in this Criterion presentation, which boasts deep, inky blacks and a host of greys that shift seemlessly throughout their sizable spectrum.  Detail, both in fine objects and faces, excedes expectations and, at times, even exudes remarkable levels of clarity.  Criterion has also pleasantly presevered the film's grain structure, which, although not as heavy as The Seventh Seals', still adds both weight and texture to the imagery, in turn according depth to the frame.  Coinciding with this visual accomplishment is its audial counterpart:  a stable track that offers crisp dialogue and apropos incorporations of Erik Nordgren's score.  As in a few other recent restorations, the linear PCM mono can come off as a bit flat, though it still astutely articulates effect sounds other audible intonations.  This is, undoubtably, one of the more impressive restorations I've seen of a 1950's film.