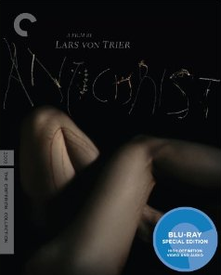 Antichrist is about excess.  And I refer not to the film’s facetiously bloated aesthetical flourishes or the wanton cruelty inflicted by, and to, its leads, but instead the intellectual surplus of our species and how our collective drive towards actualization distorts our perceptions of nature.  In short, empathy, and our ability to find affecting-yet-arbitrary parallels between our experiences and other observable—but mutually exclusive—phenomena, causes us to overlook the innate oneness of the Earth.  Before we became adept at reasoning, realized our mortality, and forged the lingual link that accords such understanding, survival was contingent on violence.  Thus, the progression that’s given way to our contemporary comforts has distanced us from natural tendency through, especially for the non-working class, our synthesized sterility.  With Antichrist, Danish great Lars von Trier subverts our ecological evolvement by centering his provocations on the perception-altering catalysts that manipulate our sensorial, and by proxy psychological, stability—a film not about the difficulties faced in any specific misfortune but those inherent to humanity due to our accrued complexity as a people.

But Antichrist isn’t as coldly clinical as all that.  Von Trier, perhaps more so than even today’s other auteurs, understands social cause-and-effect and infixes the work with the implication that, while it’s crucial we be cognizant of our basic carnality, we must still pay heed to the manufactured social burdens that make modern life livable.  Which is why von Trier portrays prototypal male He (William Dafoe) as so disdainfully proud.  Following a prologue—which shows, through jokingly amplified imagery, He and wife She (Charlotte Gainsbourg) ferociously fornicating as their toddler son Nic (Storm Acheche Sahlstrøm), hypnotized by the crystalline purity of falling snow, climbs out a window and plummets to his doom—He, disapproving of the drugs dealt She by her doctor, has the idea to initiate psychotherapy himself.  But by treating his wife analytically instead of adoringly, he imbues their day-to-day interactions with crippling emotional frigidity.  Rather than comfort her as a lover would and/or should, He, too relentlessly logical and probing of the mysterial, outwardly dissociates himself from their shared filial loss.  And worse, by not reflecting his companion’s grief, he queers her justified sense of entitlement to it.

Of course, such amassed spousal negligence has to eventually spill over physically (at least in von Trier’s world), as it’s made obvious that grief is wreaking hallucinogenic havoc on She’s cognitive and somatic soundness; the conflation of this distress and her husband’s ardent impedance only retrogrades their feelings toward each other and their orientations to reality.  Upon pigeonholing her fears by assuming that she’s most afraid of nature—and, latently, its unstructured emphasis on survival – the two retreat to a rustic cabin located in the woodland Eden.  There, environmental agency gnarls the pair’s perceptions, as their physiological feedback systems overpower their perspicacity.  But the violence inflicted to – and physical domination of—She by He shouldn’t be misconstrued as misogyny.  As in his previous films, von Trier isn’t positing masculine superiority but demonstrating the oppressiveness of institutionalized sexism.  In Antichrist, we learn that She, while previously at Eden with Nic, was working on a thesis about “gynocide” and became a victim of sexist intertexuality:  by researching, and thus exposing herself to, the rampant prosecution of women throughout history, She also comes to believe that femininity carries an innate evilness.  Through this, von Trier’s film organically elicits the obstacles to finding a balance between the corporeal and coherence:  how our bodily responses care not for our courses of thought, and, resultingly, how this instilled imbalance can produce extreme behavioral alterations.  As such, Antichrist is not a horror film but an assay about humanity at its most vulnerable.  The antipodal personae of its principals, which embody this dichotomy of excitability and good sense, serve as commentary on the appropriateness of intervention, be it love, science, or art.  We, as humans, have a unique burden in the way progression forces us to take stock in each other’s perspectives.  Otherwise, as the movie’s emblematic talking fox so eloquently puts it:  Chaos reigns.

Von Trier’s dedication of this film to Russian legend Andrei Tarkovsky may only be comparatively germane from a compositional standpoint, but the luscious greens of its Stalker-and-Solyaris-inspired thickets are so stunningly rendered in this Criterion Blu-ray that it’s easy to accept the reference for reference’s sake nature of the great Dane’s aesthetic potpourri.  Also striking are the infinitely inky blacks and beautiful balance of contrast that define the prologue’s farcically glossy, NC-17-rated ambiance.  Transitions are largely seamless, though, at times, manifestations of manipulation crop up to accentuate the inconsistencies of the characters’ combative dispositions. The actors’ flushed-with-life flesh tones come across as enchantingly accurate, a quality that’s nicely juxtaposed against imagery that exudes an otherwise inexorable coolness.  The English DTS-HD Master Audio 5.1 sound track is as crisp and inviting, for lack of a better word, as I remembered it being in theatrical format, with resoundingly stable dialogue and apropos effect design.  Händel’s beautiful “Lascia ch'io pianga” adds an immersive touch of class to the carnal copulating of its opening and the shrieks of She reverberated hauntingly through my surrounding speakers.

As usual, I can sing only praise upon Criterion’s high-def representation and, frankly, am damn glad that they picked up this film that was bombastically bashed by critics who couldn’t see the forest for Eden’s threateningly spectral trees.