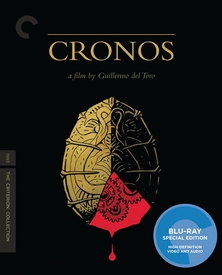 Time’s inexorable effects on perceptions of life and, perhaps more apropos, death is a quiddity of Guillermo del Toro’s thematic canon, so it comes as little surprise that the characters of his first film, Cronos, are ascribed, sometimes to the point of caricature, by their relationships with mortality as defined by their unique temporal locations.  But del Toro’s fabulations are oftentimes ensconced within a fairytale framework, as this concessional motif accords a formal justification of both his stilted chromaticism and the sometimes-depthless dimensionality of his principals – the personalities indwelling his works, even those of etched from modish tradition, read more fittingly as ostentatious derivatives than actual cultural denizens.  Still, in Cronos, there exists an inviting lyricism in how he rhymes compositions of punctuated primaries with his interest in youthful innocence; the appropriate piquancy of his aesthetic denotes scenes of violence with a perceptively puerile levity that doesn’t trivialize the picture’s grander concerns of maturation and oblivion.

Unspooling as a tale of fabling interest, Cronos centers around an immortality-granting device that’s encased within an intricate golden scarab.  With wispy legs and an enticing veneer, the mechanism is as invitingly decorous as it is magically potent, though the extent of its contents – a network of gears and a "living filter" meant to explicitly evoke an erosion of father time’s effects – is something that solely viewers are privy to.  It was concocted by an alchemist some four hundred years prior to the picture’s cardinal narrative, and del Toro elucidates its legend through a more-ambient-than-inspired prologue that portends the apparatus’s perdurable powers, which, for whatever reason, include vampirism.  But despite the immixture of vampiric mythology and musings of immortality, Cronos is best defined by the iconism that del Toro attempts to interject into his characters.  Whereas soon-to-expire businessman Dieter de la Guardia (Claudio Brook) shelters himself in a sanctuary of sterility, his possessions swaddled in unfeeling plastic and his quarters adorned with aquariums of removed organs, antique dealer Jesús Gris (Federico Luppi), despite his affableness, lives a life of proletarian pining.  The two both come to be obsessed with the device, though for reasons more akin, at least latently, to socioeconomic status than the inherently human fear of death:  De la Guardia uses his fiscal agency to essentially buy out the grim reaper while Gris, classified best by familial warmth and boyish immediacy, longs for a regression to his former sexual potency.  And in an interestingly reflective flourish, del Toro paints the personae of their kinfolk – specifically De la Guardia’s nephew Angel (Ron Perlman) and Gris’s granddaughter Grace (Tamara Shanath) – as reactions to their elders’ proximity to passing away.  Grace’s uncorrupted essence leaves her fearing for her grandfather; her green understanding of life’s fragility forges a channel for del Toro’s flightily contrasting compositions.  Tonally-opposite-but-formally-apposite is Angel’s disposition, as his spastically profane and violent tendencies accommodate the picture’s instances of more visceral onslaught.

But despite the symbiotic back-and-forth of the film’s aesthetic and its characters’ cognizance, Cronos too often reads as a concession of del Toro’s own inexperience behind the lens.  More often that not, he struggles to flesh out his underlying cultural concerns past the point of artifactitious tangentiality, leaving issues like the poignancy of faith and horror movie mythos teetering on the film's thematic limen.  What’s left is an aptly subversive, healthily architectured take on vampiric lore, but, in a way that’s consistent with Grace’s youthful guilelessness, Cronos is a byproduct of a still-rudimental, though no less amicable, artisan perspective.

Perhaps using the word “penetrating” to describe a vampire picture’s audio/video particularities is more than a little cherry-picking, though it’s indeed a befitting descriptor of this high-def Criterion transfer.  Cronos’s color palette is one of kaleidoscopic amplification, with the director employing a slew of filters and hyperpigmentation aimed at evincing a sense of enchantment, and this 1080p representation gives balance to this congenitally aggressive coloration while keeping contrast levels within believably organic confines.  Del Toro’s blood-reds run deep here, and the milky blues of life-drained flesh elicit an even more arresting coolness.  The dynamic betwixt grain and fine object detail achieves a delicate equilibrium and appears consistent in everything from the enshrouding darkness of shadow to the luminosity of coruscating sunbeams.  Criterion’s lossless DTS-HD Master 2.0 track offers a hearty amount of depth and dynamicism, one that boasts both crisp confabs and stable sound effects.