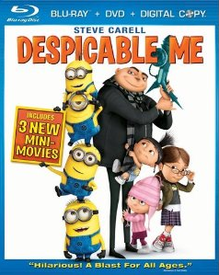 Screen villains have all the fun, but lately they've gotten the chance to anchor their own movies. Despicable Me asks the question, what happens to a super-villain when his evil deeds are trumped by the new bad kid on the block? Steve Carell voices Gru, an Uncle Fester doppelganger who lives to cause mayhem. But when a new villain named Vector enters the scene (voiced by Jason Segel) and pilfers a pyramid, Gru decides to up the stakes. He plots to swipe the moon.

Gru also wants to penetrate Vector's lair, and he spontaneously adopts three children to pose as Girl Scout Cookie hawkers to make that happen. Yes, setting up the story's Grinch-like redemption takes some heavy lifting, but it's mostly worth it once the story whirs to life. Despicable Me doesn't rise to the Pixar stratosphere, but it's brimming with good cheer, nifty gags and gorgeously realized animation.

The Blu-ray extras include the usual grab-bag, like a segment on the vocal performances behind the film. But the sweetest part is the three-pack of original mini-movies, the best of which is the delightful "Home Makeover." All three share the film's high quality animation, but Carell doesn't make an appearance in any of them.

Exit Through the Gift Shop may be a fraud, but critics took it far more seriously than the other 2010 faux documentary I'm Still Here. And with good reason, since this bracingly original look at street art is compelling until the final frame.

The movie takes audiences through the world of street artists via a most unlikely tour guide. Los Angeles resident Thierry Guetta uses his video camera to shoot everything in his life, but he finds a purpose when he starts documenting the street art scene around him.

That obsession ostensibly begat Gift Shop, a film directed by famed street artist Banksy that looks at Guetta's impact on the world he only wanted to document - at first.

The documentary is disinterested in the damage - and cost - involved in the "canvases" used to bring street art to life. Nor do we meet any outside art experts for context. Yet even those who despise graffiti will admire Banksy's outsized talents and provocative statements. He's like an editorial cartoonist refusing to draw within the lines.

Shop ends up mocking the art it seeks to celebrate. Guetta, a fairly annoying personality whose life when he's not shooting video is given little attention, becomes an artist in his own right. It's here where the film's satire cuts the deepest.

The DVD extras include deleted scenes and a conventional featurette on Banksy, a piece that describes his evolution as both artist and social commentator.

Cyrus marks Jay and Mark Duplass' attempt to leave the Mumblecore indie movement behind. The directors behind Baghead and The Puffy Chair corral three name actors for the story of a lonely man, the girl of his dreams and her hopelessly clingy son.

John C. Reilly stars as John, a hapless divorcee who manages to charm the stockings off a single mother (Marisa Tomei, enchanting as ever). Naturally, there's a catch - her son Cyrus (Jonah Hill) still lives at home with her, and the apron strings are fastened together with a bowline knot. Cyrus doesn't want to share momma with anyone, setting off an unconventional war with John for her attention.

One expects naturalistic performances from Tomei and Reilly, but Hill's decision to underplay Cyrus's mother issues gives the film its edge. The laughs here are small but not inconsequential, and there's something oddly touching about Cyrus' inability to navigate the real world.

The Blu-ray extras include deleted scenes, a Q&A segment with the Duplass brothers and a "Music Mash-Up" with stars Reilly, the erstwhile Dewey Cox, and Hill.

John Wayne didn't need the Coen brothers to make True Grit, one of the most revered westerns in film history. He made do with an eye patch, a gut and every ounce of movie star appeal the then 61-year-old actor could muster.

The 1969 classic which earned Wayne his sole Oscar is now available on Blu-ray to coincide with the release of the Coen brothers' remake starring Jeff Bridges as the ornery Rooster Cogburn.

Kim Darby stars as Mattie, a teen out for vengeance when her father is murdered in cold blood. She hires U.S. Marshall Reuben J. "Rooster" Cogburn (Wayne) to track down the killer. The pair is joined by a Texas Ranger (Glen Campbell) with a chip on his shoulder and an accurate shooting eye.

The trio's quest isn't out of the ordinary by western standards, but the interplay between the leads transcends the genre. Wayne pushes past his usual screen ticks to make Rooster one of his most complicated heroes. He's a drunk and a fool but he displays that titular "Grit" when it counts. Campbell remains the very weak link here, but the film's gorgeous cinematography and sterling supporting cast—including Robert Duvall —more than compensate.

The Blu-ray extras include commentary by Western film historians and a featurette called "Working with the Duke" allowing co-stars like Campbell and Darby to reminisce about the shoot. The actor was John Wayne on set and off, Campbell recalls, as authentic as his hardcore fans imagined. And when Wayne was ticked at you, you knew it, the singer says with a smile. Darby used the source material, "True Grit" by Charles Portis, to flavor her performance while Wayne called upon his own screen experience to create the iconic Cogburn. That friction helped make movie history.

Tags: Despicable Me, Exit Through the Gift Shop, Cyrus
Print