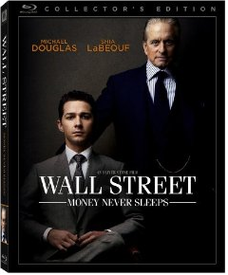 For a few blissful moments Wall Street: Money Never Sleeps marks the return of director Oliver Stone, Oscar-winning storyteller. The man behind JFK, Platoon and Talk Radio has been in a creative rut in recent years, bouncing from the inert World Trade Center to the unnecessary W.

His Wall Street sequel features the kind of fizzy entertainment Stone routinely delivered a decade or so ago. He's got plenty to work with, revisiting Gordon Gekko (Michael Douglas) after his release from prison at the dawn of the 2008 financial meltdown.

Ol' Gordon has a new protégé, an eager young broker played by Shia LaBeouf. And, as storytelling luck would have it, LaBeouf's character is smitten with Gekko's daughter, played by Academy Award nominee Carey Mulligan. But is the young broker a match for the new Gekko on the block (Josh Brolin)?

Money Never Sleeps takes a while to find its footing, but by mid-film Stone's new film feels both relevant and exhilarating. But the final story arc, filled with awkward resolutions and reveals, all but decimates that good will.

The Blu-ray grab bag includes deleted and extended scenes plus some meaty features about the film's creation.

"The crash made it fascinating again for me ... Millions had become billions," Stone says of the current fiscal backdrop. The cast questions Stone with real curiosity, a nice dynamic that lets us learn more about what makes Stone's creative side tick. The cast even offer up their stock tips.

"The real secret is knowing the right people. It's like Hollywood," LaBeouf says.

Once upon a time, the phrase "from the mind of M. Night Shyamalan" didn't send audiences into a fit of giggles. That was then, and now Shyamalan's name is shorthand for hackery after dreck like The Happening and The Last Airbender.

Yet "Devil," a new film born from a Shyamalan story, isn't a debacle. It's got some of his signature tics, from the now familiar trick ending to a classic struggle between good and evil. The concept is so intriguing it's all but impossible to disrupt.

Five strangers step into an elevator and find themselves trapped before reaching their floors. Workers frantically attempt to free them, but every time the lights flicker and fade something horrible happens within the cramped space.

Could the Devil be one of the five in the stalled elevator?

The film delivers several jolts but only one gold-plated scare from someone you won't expect. Chris Messina anchors the story as the cop trying to guide the rescue effort, but the ultimate payoff isn't as intriguing as the premise.

The Blu-ray extras include a trio of slight but revealing features. In "The Story," the film's director John Erick Dowdle (Quarantine) and Shyamalan describe the realism that grounds the surreal series of events. "The Devil's Meeting" explores the South American folklore which inspired the film. And "The Night Chronicles" shares how Devil is the first in a trilogy of terror films Shyamalan promises—or threatens—to produce.

The truncated list of actresses who can commandeer an action film starts with Angelina Jolie. In Salt, she's cast as Evelyn Salt, a U.S. spy with a productive work life and a happy marriage. Take that, James Bond.

But her happiness evaporates when a Russian spy tells U.S. authorities of a plot to assassinate the Russian president during his upcoming trip to America. The informant fingers Evelyn as the assassin, sending her off to prove her innocence with her former allies on her trail.

Could she be a double agent who‘s been fooling friends and fellow agents for years?

Salt director Phillip Noyce remains a master of choreographing set pieces worthy of blockbuster status. Jolie is as comfortable hopping from moving vehicles as she is denying her double-agent status, although her gaunt frame makes it hard to buy her overwhelming her assailants.

Salt still seems like a missed opportunity at a new franchise. Evelyn's romantic back story isn't given enough attention, and the chasms in logic render the mysterious plot irrelevant.

Consumers get not one version of Salt but three—the theatrical model and two extended editions. The Blu-ray extras include a tribute to Noyce‘s body of spy films and a look at how the film's amazing action sequences came to be.