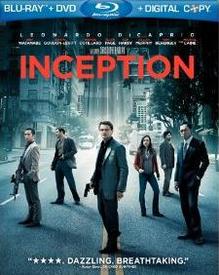 The arrival of Inception on Blu-ray and DVD means movie goers can watch Christopher Nolan's thriller again—and again—and suss out the whole story.

The uber-complicated film casts Leonardo DiCaprio as an "extractor," a man who can infiltrate people's dreams and swipe thoughts and ideas from them. His team of dream warriors is hired by a Japanese businessman (Ken Watanabe) to do the opposite—to implant an idea in the mind of a rival.

That boldly original starting point leads to an increasingly complex narrative that's both dizzying and daffy. The characters often have to drop reams of expository dialogue just to keep audiences abreast of what's happening at any given moment. It's ambitious, smart, breathtaking and frustrating in equal measures. But it's unlike any film we've seen before.

The first-rate cast, including Ellen Page, an underused Michael Caine, Joseph Gordon-Levitt and Marion Cotillard, grounds the material as much as possible. But this one demands repeated viewings - and a scratch pad to keep apace.

The Blu-ray extras include "Extraction Mode," an exhaustive making-of featurette led by Nolan, "Dreams: Cinema of the Subconscious" hosted by Gordon-Levitt, a Motion Comic prequel dubbed "Inception: The Cobol Job" and a conceptual art gallery.

Restrepo may become the definitive documentary on the Afghanistan War. Three years ago, the film's co-directors Sebastian Junger and Tim Hetherington hung with a platoon of U.S. soldiers in Afghanistan's Korengal Valley, one of the country's most dangerous regions. War is still hell, and the cameras capture every maddening aspect of it.

The documentary remains ideologically neutral from start to finish, and the soldiers are neither deified or pilloried. They're achingly human, willing to dance with each other one moment to blow off mountains of steam and then, later, openly weep when a fellow soldier dies before their eyes.

There's no narrative in the traditional sense, although running themes like the harrowing Rock Avalanche campaign and a mystifying conflict concerning a dead cow typify the conditions the soldiers endure. The cultural chasm between the troops and the locals are illustrated with maddening clarity, giving viewers the sense of just how tall an order the mission was in 2007 - and still remains.

The action sequences are frightening and raw, and when the camera shakes it's not an artsy affect like those Bourne films but proof the camera operators were in harm's way just like the soldiers.

The Blu-ray goodies include documentary outtakes and interviews with the filmmakers and soldiers involved in the feature.

The Twilight Saga: Eclipse continues the wildly popular franchise's penchant for pleasing its fan base and leaving non-Twihards exasperated.

The latest chapter in the Bella/Edward love story finds the pale and frail Bella (Kristen Stewart) torn between her beloved vampire (Robert Pattinson) and the new werewolf on the block, Jacob (Taylor Lautner).

The wicked Victoria (Bryce Dallas Howard) wants to take out Bella for good, forcing Edward and Jacob to form an alliance to keep the woman they both love safe. That means the franchise's love triangle goes into overdrive, but Lautner remains incapable of carrying his end of the bargain, dramatically speaking.

The film shares the same flaws of its predecessors, from uneven acting to crude special effects—although the latter improves each time around. The spare action sequences won't draw in new fans to the franchise, but the screen chemistry between Stewart and Pattinson remains palpable. Their moist-eyed moments remain the series' best selling point.

Eclipse comes in a "Movie Only Edition" - meaning no extras, as well as a beefed-up edition with dual commentary tracks (Stewart and Pattinson, "Twilight" author Stephenie Meyer and producer Wyck Godfrey) plus a six-part documentary, "The Making of ‘The Twilight Saga: Eclipse.'"