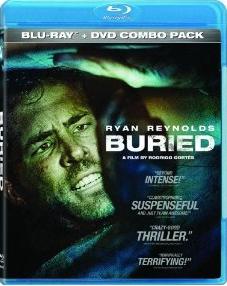 Hard to believe People Magazine's Sexiest Man Alive could star in a film that made slightly more than $1 million during its domestic release. That's what happens when you bury Ryan Reynolds in a pine box for 90 excruciating minutes.

Buried casts Reynolds as a U.S. truck driver in Iraq whose convoy is attacked by insurgents. He survives the assault, but is thrown into a coffin by the insurgents and left with only a flashlight, a cell phone and a dwindling air supply.

Director Danny Boyle worked magic in similar circumstances with 127 Hours, finding the humanity within a character trapped in cramped quarters. Buried can‘t do the same despite a noble turn by Reynolds and some deliriously clever camera work.

The script's cynical nature deserves plenty of blame. Buried isn't merely anti-war, but anti everything—including the main character. Reynolds' Paul Conroy is a jerk, the corporation he works for is detestable and even the people Paul desperately calls for help deserve little respect.

The script emerges as a series of dramatic feints, some existing to gobble up time, others to build on Paul's sense of isolation. That sturdy pine box does the trick all by itself.

Director Rodrigo Cortes squeezes every possible angle out of the scenario, and he generates some magnificently tense moments. And, at a time when nearly every film bungles the final reel, Buried sticks the landing in a way that should make M. Night Shyamalan stand up and cheer.

The main Blu-ray extra breaks down how the film was made and the cast's healthy sense of humor.

"There are 40,000 reasons for not making this movie," cracks Cortes on the first day of the shoot to his crew.

We see Reynolds forced to emote in a series of seven coffins built for the film. The actor may be a new entry on the A list, but his willingness to star in a punishing film like Buried speaks to his work ethic.

Das Boot took us inside a WWII submarine to reinvent the war genre. Lebanon attempts the same by placing the viewer alongside Israeli soldiers stuffed in a tank.

The end result isn't a modern classic, but by limiting our vantage point to a gun turret's scope the horrors of war come into microscopic detail.

Shmulik (Yoav Donat) isn't exactly ready for prime time battles, let alone manning an Israeli tank's main weapon at the start of the 1982 Lebanon war. The first time he's ordered to open fire he freezes up and a fellow soldier is shot as a result.

The rest of his crew hardly seems much better. They constantly question their commanding officer and complain about every aspect of their duties. It's hard to blame them given the atrocities just outside the tank.

The new film, a joint production of Israeli and German studios, critiques war in general without devolving into ideological talking points. But we don't connect to the quartet of Israeli soldiers in harm's way. We're left with a visceral experience as cold as steel.

The only Blu-ray extra of consequence here is "Notes on a War Film," a crudely fashioned documentary revealing how some of the horrific movie sequences came to pass. We also meet cast members who actually served their country as well as recall how a spokesperson for the IDF (Israel Defense Forces) had plenty of bones to pick with "Lebanon's" script.

Death Race 2 gets off on the wrong foot with its title. It's actually a prequel to the 2008 guilty pleasure starring Jason Statham.

The real connective tissue between the projects is Paul W.S. Anderson. He wrote and directed the Statham film and produced this direct-to-DVD affair.

Luke Goss steps in as the prisoner forced to race against some unsavory sorts to stay alive. Goss's Carl Lucas has the same shaved head and imposing physique as Statham, and he's perfectly adequate to anchor a movie with decidedly low expectations.

Death Race 2 delivers slow-motion explosions, curvaceous women and a plot you can track on a cocktail napkin. Old pros like Sean Bean, Ving Rhames and Danny Trejo add class to a gleefully classless outing. The final 20 minutes ties the film nicely into the first feature,

The extras include a smashing "making of" segment showing how some of the film's biggest stunts came to pass. CGI gets pushed aside for actual car stunts, and real actors endured fire—and more—to bring the action-packed story to life.

The featurette also gently reminds us of the production's scale. A stunt guru talks about Carl's yellow mustang and the conditions required to use it in the film.

"We have to return it without a scratch," the stunt expert shares with a smile.