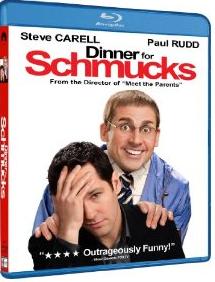 Dinner for Schmucks should have spawned another comedy franchise given the talent in front of-and behind-the camera.

Steve Carell and Paul Rudd team up for the story of a rising executive (Rudd) who learns he'll have to behave rather badly in order to get a promotion. He must invite an idiot to a dinner party where the soul purpose is to make fun of the mentally challenged guests. Rudd's character finds a ringer in Barry (Carell), a simpleton who stuffs dead mice for fun.

Director Jay Roach (Meet the Parents, the Austin Powers franchise) captures the frantic repartee between the leads as well as any of his peers might. Carell adds layers of sympathy to the titular Schmuck role, but the script isn't clever enough to take advantage of a deep cast-including Zach Galifianakis, Lucy Punch and Jemaine Clement.

The best Blu-ray extra profiles the "mousterpieces" Barry creates throughout the movie. The Chiodo brothers, the trio of artists who helped bring the characters in Team America: World Police and Killer Klowns from Outer Space to life, created tiny mouse replicas for the film that anchor the story and provide some big laughs.

One alternate scene included here should have made the final cut-Barry teaches a distraught woman the healing powers of scream therapy. It's a smartly scripted moment given life by Carell, and it ends with a fine comic surprise.

This year, audiences conducted an informal "is it real" debate over the Joaquin Phoenix documentary I'm Still Here. Some did the very same head-scratching after seeing Catfish, the Sundance sensation about a Facebook bond between a photographer and a talented pre-teen.

The minds behind Catfish insist it's all true, but even if the narrative got a fictional tweak it's still an arresting experience.

Young Nev's photography career lands an unexpected fan—an 8 year old girl named Abby who paints assured portraits based on his snapshots. They develop a friendship on Facebook, but it soon expands to include Abby's mother and attractive older sister. When Nev decides to meet them in person the story takes unexpected turns.

Catfish delivers some tense moments as well as a few cathartic ones, the film manages to comment on our social media age in ways a traditional movie might not get away with.

The bonus feature of note on the Blu-ray release captures a Q&A between the filmmakers and an audience during the promotion of the film.

Nobody told Renee Zellwegger that we've already seen Case 39 before when it was called Orphan ... and Joshua ... and The Bad Seed. There's something unnerving about children who aren't quite right, but Case 39 doesn't add much new to this slim horror genre.

Zellwegger tackles the material with brio all the same, brushing past formula as it if it were a rude dinner guest.

The story begins with Emily (Zellwegger), a dedicated social worker, discovering a girl (Jodelle Ferland) being threatened by her parents. She rescues the youngster from certain death and decides to care for her until more suitable foster parents can be found.

But trouble swirls around this sweet-faced girl, and it could be far more than Emily can handle.

Bradley Cooper flashes some winsome charm playing, essentially, the pretty girlfriend role, and a few creepy moments ensue. But we're treated to just as many cheap scares and some logic chasms that ruin the film‘s final scenes.

The copious Blu-ray extras include an alternate ending, deleted scenes and a trio of futurities on the film's creation.

Robert Rodriguez's attempt to revive the gritty, gutty Grindhouse genre from the ‘70s failed with Planet Terror, the film co-released with Quentin Tarantino's Death Proof back in 2007.

But the faux trailer slipped into Rodriguez's film made enough of an impact to generate a full-length feature.

Machete follows an illegal immigrant (Danny Trejo) who gets double-crossed by a super shady senator (Robert De Niro) out to stop the flow of Mexicans from the U.S. border. It's merely an excuse to trot out scantily clad women, blood-soaked action and the kind of spare dialogue that would make Clint Eastwood crack a smile.

And there's nothing wrong with any of the above, especially when Trejo spits out lines like "Machete don't text." But the film can't capture the chaotic joy of either Terror or the trailer that inspired it. Cranking out B-movie mayhem is easier said than done.

Machete's political subtext is as coarse as every other element on display, mocking politicians who embrace extreme border enforcement.

The Blu-ray extras hash out a snipped subplot involving Alba's character's twin sister, plus the gross execution of one of the film's lesser roles, played by FX guru Tom Savini. The most novel bonus comes with the "audience reaction" track, where you can watch the film while hearing hoots and hollers from an unseen Grindhouse devotees.