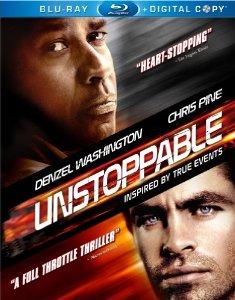 Chris Pine stepped in admirably for William Shatner in the 2009 Star Trek reboot. But it took "Unstoppable" to show he carry a mainstream action vehicle without an ensemble to keep him company. Sure, he shares the screen with Denzel Washington in the fact-based thriller, but Pine does more than hold his own with his Oscar-approved co-star. He complements both Washington and an incredible story.

Pine plays a neophyte railroad employee who teams up with a veteran (Washington) to stop a train from crashing into a crowded Pennsylvania town.

Director Tony Scott wrings everything possible out of the scenario, amplifying the train-related sounds and reminding us just how powerful a unchecked locomotive can be.

The Blu-ray extras include "The Fastest Track: Unleashing ‘Unstoppable,'" "Derailed: Anatomy of a Scene," and segments on the film's stunt work and script development.

"The American public is very savvy. They know when it's real and when it's manufactured," director Tony Scott says of deftly blending actors and stunt professionals on set.

"What am I doing?" Washington asks with a smile as he recalls scrambling atop a moving train with only a cable leash to protect him from harm.

Political movies today often suffer a quick, cruel death at the box office. All the President's Men stands as an historical exception.

The 1976 film not only captured the tumult and tragedy surrounding the Watergate scandal but snared four Oscars in the process.

Men remains the template for how to do a politically charged film right. It's smart, sober and meticulously crafted, and it treats the important subject matter with the proper amount of reverence.

The Blu-ray presentation, while not as crystal clear as some recent films spit-polished for their HD close-up, offers a 40-page book-like casing with key information about the film and the Watergate scandal.

The extras include "Telling the Truth About Lies: The Making of All the President's Men," a featurette describing the pressures felt in capturing such a pivotal moment in American history.

"We knew if we ‘Hollywooded' it up we'd all be in trouble," screenwriter William Goldman recalls.

The package also features a talk show appearance by Jason Robards on "Dinah!" and a segment on the man behind "Deep Throat."

How could a movie made in 1976—before Fox News, Twitter and TMZ—nail television news as effectively as Network does?

The Oscar-winning film makes its Blu-ray bow with every satirical swipe intact. Peter Finch plays Howard Beale, a burned out newsman who loses it on-air after learning he's about to be fired. The incident sparks copious news coverage—and ratings—convincing the station's executives to keep Howard on the air no matter his mental state. His career resurrection says plenty about both the public at large and a news media eager to exploit its audience at every turn.

Yes, the ‘70s styles and incessant smoking put Network squarely in the disco decade, but the tug of war between serious journalism and infotainment is as relevant as ever.

Network isn't perfect, even if its Crystal Ball retains its 20/20 vision. Viewers endure too many preachy moments and monologues that run on indefinitely. Sometimes the satire is so pitch dark it doesn't allow a single watt of light to enter the screen.

The Blu-ray release features a six-part documentary on the film's creation, commentary by director Sidney Lumet and an interview with the director conducted by Turner Classic Movies' host Robert Osborne.

Hoodwinked! didn't make as much coin as its Pixar peers during its 2005 theatrical release, and its animation simply can't compare to the likes of Madagascar and Ice Age.

Seen anew in Blu-ray, the film delivers a cheeky take on classic fairy tales sure to engage the under 13 set. It also serves as a kid-friendly primer to the classic Rashomon brand of storytelling, recounting Little Red Riding Hood's trouble with a certain wolf.

The Blu-ray extras include "The True Behind the Scenes Story," deleted scenes and a commentary track from directors Cory and Todd Edwards plus co-screenwriter Tony Leech.

We now know Robert Downey, Jr. can do almost anything on screen, from playing an iron avenger to literature‘s most famous sleuth.

But in 1992 the actor flashed the full scope of his powers in Chaplin, making its Blu-ray debut this week. The biopic earned Downey his first Oscar nomination, but it couldn't measure up to the actor's remarkable turn or Charlie Chaplin himself.

Chaplin tells the comedian's life in full, starting from an impoverished childhood to his later expulsion from the U.S. There's simply too much information to process along the way, leaving a "greatest hits" package instead of a richly observed character study. The framing device cobbling the scenes together isn't up to the task, either, despite Anthony Hopkins' presence as the man assigned to corral Chaplin's autobiography into narrative form. Chaplin's many romances are reduced to footnotes, and some of his greatest comic inspirations aren't given their due respect.

And yet Downey magically resurrects Chaplin's physical gifts and hints at the darkness behind the clown's mask in ways that still leave us cheering.

The Blu-ray goodies include "Strolling into the Sunset," a look back at the film's creation with director Richard Attenborough (Gandhi), "The Most Famous Man in the World," a glimpse at the culture's biggest attraction of his day and "Chaplin the Hero," a chance to let film historians like critic Richard Schickel of Time Magazine assess Chaplin's place in film culture.