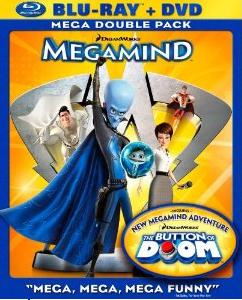 Today's animated hits don't let the good guys grab all the fun. Despicable Me turned the spotlight on a bald baddie named Gru, while the new to video Megamind does the same for its main character.

The villainous Megamind (Will Ferrell) dreams of defeating his arch enemy, the so perfect it hurts Metro Man (Brad Pitt). But when Megamind actually pulls off the feat he falls into an existential malaise. So he zaps a lowly camera operator (Jonah Hill) with a ray to give him super powers and, hopefully, create a new adversary.

All the while Megamind tries to woo Roxanne (Tina Fey), a feisty reporter in the Lois Lane mold.

Megamind pokes fun at the Superman mythos while serving up dazzling animation and a neat spin on the balance between good and evil. But it takes nearly half the film to establish the ultimate plot conflict. It's a long slog until then, but once Megamind finds its rhythm the results often astound.

The Blu-ray package includes picture-in-picture storyboards, a trip to Megamind's lair, a featurette on how to draw the Megamind character and a segment on the vocal performers behind the high jinks. The latter proves to be as self-congratulatory as expected, but it also lets Ferrell and company reveal meaty snippets of the creation process like why Megamind can't pronounce the name of his own city.

The boys are back in town this week as the ‘80s buddy cop classic 48 Hours makes its Blu-ray debut.

The story is pure buddy template, albeit done to near perfection. Nick Nolte plays a hard-drinking detective who teams with a convict (Murphy) to bring in a cop killer (James Remar). The Nolte/Murphy pairing probes the era's racial unease in both comic and thought provoking ways and never at the story‘s expense.

Remar doesn't get enough screen time, but he's a magnetic villain who gives our heroes fits.

Had 48 Hours been made today, the film would have shoehorned a number of comic set pieces for Murphy to crush. Instead, the young actor plays it mostly straight. He's a live wire who cannot be contained, and his flawed but fiery performance hints at his future screen triumphs.

The film cries out for an array of Blu-ray extras, or at least a commentary track from Hill and the leads. But the Blu-ray edition arrives sans any extras save the theatrical trailer.

It‘s hard to think of another actor better suited to play a man obsessed with his own mortality than Robert Duvall. In Get Low, Duvall plays Felix Bush, an old coot with a mysterious past but a definite plan for the future. He wants to stage his own funeral before he "gets low." So he reaches out to a veteran undertaker (Bill Murray) and his young sidekick (Lucas Black) to stage his final public appearance.

Plenty of locals would love to see Felix buried now, not later. Get Low shrewdly doesn't reveal why all it once. The story gently puts the puzzle pieces together, from Felix's ties to local woman (Sissy Spacek) to an old friendship left to gather dust.

Duvall is mesmerizing as the old timer eager to set his own record straight, but Murray's decision to underplay his role does Get Low a disservice. Get Low is already as dry as cracked wheat. A dollop of Murray's wit would have brightened the somber story.

First time director Aaron Schneider, a cinematographer by trade, evokes the homespun beauty of the south circa the 1920s.

The Blu-ray extras an honest "making of" short entitled "Deep South," letting the film's key players describe the challenges behind the movie. Making a film with an older cast that's as thoughtful and deliverate as Get Low is all but impossible these days, so the crew turned to one another for emotional support along the way.

"It's comforting to know you're leaving a beautiful little story behind," Schneider says.